For just the third time in six years, there will be no Triple Crown win at stake.

Oh, and the Preakness Stakes on Oct. 3 is the final leg of the series instead of the second. It’s usually conducted between the Kentucky Derby and Belmont but will be run in October instead of May, and there won’t be any fans in attendance, all offshoots of COVID-19 precautions.

Other than that, Pimlico’s brief jaunt of 1 3/16 miles will seem perfectly normal, as the decision of trainer Barclay Tagg to skip the race with Belmont Stakes winner Tiz the Law — that race was first this year, in June — means there will be no Triple Crown awarded.

Bob Baffert-trained Authentic, who held off runner-up Tiz the Law by 1 1/4 lengths in the Kentucky Derby despite a furious late rush, heads the 11-horse Preakness field, though, as a 9-5 moneyline favorite.

As might be expected with a trainer who has won 16 Triple Crown races, there is personal history in play for Baffert. He could become the most successful trainer in Preakness history with an eighth victory. 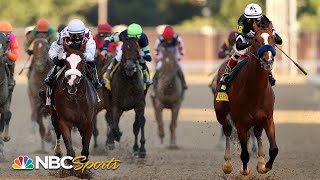 All of the contenders worked at Pimlico on a cool Thursday morning devoid of the warmth and humidity that is typical in Maryland in May. Baffert was pleased with the efforts and the Saturday prognosis of both Authentic and stablemate Thousand Words, who was listed as 6-1 in the morning line. Baffert said the rescheduled Preakness could benefit his barn.

Thousand Words enters as an enigma, having been scratched 20 minutes before the Kentucky Derby after he flipped in his stall, breaking assistant trainer Jim Barnes’ arm in eight places. Baffert took his own tumble in the winner’s circle when Authentic appeared unamused by the drape of roses being laid across his back.

Baffert acknowledged on Thursday that Art Collector is a threat, which had already been reflected in his second-best 5-2 morning line. The Blue Grass Stakes winner trained by Tommy Drury was also scratched just before the Derby because of a minor foot injury. The colt was training within a week.

“It was certainly difficult,” Drury said of the decision in a teleconference this week. “The Kentucky Derby is a race of a lifetime for a horse trainer, but at the end of the day, the ultimate responsibility that we have is to put our horse first and to make sure that he’s taken care of. And it just wouldn’t have been fair to him to leave him over there, especially at that level of competition, and ask him to run his very best race knowing that there was an issue going on.

With slumping handle, Triple Crown has taken a pandemic hit

National Thoroughbred Racing Association president Alex Waldrop hoped the sport’s profile would be bolstered during pandemic-related shutdowns of team sports. But the importance of date equity and in-person fans were underscored by a Derby handle that was down 52% from a record $165.5 million in 2019 after the Belmont was down more than 33% from a record of its own the previous June.