For a good part of the franchise’s history, the New England Patriots were only relevant to local NFL fans. That has changed in a big way since the onset of the Bill Parcells and Bill Belichick coaching days, resulting in some of the best Super Bowl moments in Patriots history.

Because of all the success which New England has enjoyed over the past three decades, fans of other NFL teams have grown to resent the Patriots. Mixed in among the Super Bowl wins have been moments of bliss for those people when that standard of success has faltered.

Whether it be a great play by a player on the opposition or a lapse by a Pats player, there are several moments in the NFL’s biggest game that act as consolation to those who hope New England never sees another Super Bowl.

With an NFL record 11 Super Bowl appearances, there is a greater treasure trove of moments for this franchise than any other. Most of the moments that please Pats maligners have come amidst their five losses in those games.

You could say that the ends of those games were probably New England resenters’ favorite moments when the other teams celebrated. However, most of those who feel hostility toward the Patriots probably weren’t so happy that New England was even in the game, to begin with.

The in-game moments when things didn’t go the Pats’ way all have some degree of delight for those who despise the Patriots. This list isn’t an attempt to rank them. Instead, it’s a shortlist of the best contenders. Each reader can decide how they would rank each in comparison to the others.

A great example came in Super Bowl XX in 1986. The Chicago Bears added insult to the 46-10 injury they put on New England that day when defensive lineman William “Refrigerator” Perry lined up as a halfback on Chicago’s offense then went over the top of the pile for a touchdown. 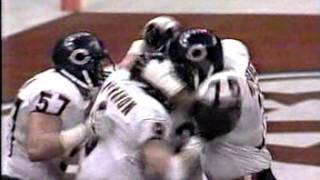 The Patriots avoided another potential even bigger embarrassment later in the game when the Bears attempted a halfback pass play for a potential touchdown, with Perry making the pass attempt. The New England defense didn’t falter on that play, however. Fortunately for haters, the same can’t be said in other moments.

Eleven years later, New England won the AFC championship again to face the heavily favored Green Bay Packers in Super Bowl XXXI. While Brett Favre carved up the Patriots’ defense to lead his team to a 35-21 win, six of those points came directly from poor execution by the Pats on special teams.

New England had cut the Packers’ lead to just 27-21 in the third quarter and was riding a wave of momentum. That was when Green Bay stole the game’s edge back on a 99-yard return for a score by receiver Desmond Howard.

Howard became the first player to be named Super Bowl MVP for his impact on special teams alone. He totaled 154 yards on four kick returns and 90 yards on six punt returns.

In 2018’s Super Bowl LII, the Patriots entered as the favorite with the fifth-best scoring defense in the 2017 regular season. Part of the reason for that defensive success was cornerback Malcolm Butler.

The former Pro Bowler recorded three fumbles, intercepted a pass twice, and notched 60 tackles during the regular season. Thus, he was a mainstay on the Pats’ D, playing 98% of snaps during the season and playoffs.

Belichick inexplicably benched Butler before the Super Bowl, however. What followed was New England allowing the Philadelphia Eagles to amass 538 yards of total offense, more than any team had churned out against the Patriots that season.

Philadelphia’s 41 points were not only enough to win the game, but more than the Pats had allowed since Week 1 of the preceding regular season.

There were many moments in which Butler’s presence on the field might have helped, like a 34-yard Eagles touchdown pass from Nick Foles to Alshon Jeffery. Foles finished the game 28-for-43 for 373 yards and three touchdowns, averaging almost nine yards per pass attempt. After the season, Butler signed with the Tennessee Titans.

The 2007 New England squad will go down as the only NFL team to record an undefeated 16-game regular season now that NFL regular-season schedules contain 17 contests. That Patriots team followed up that accomplishment by winning its playoff games, putting itself in a position to record just the second perfect season in the league’s history against the New York Giants in Super Bowl XLII.

The game’s most memorable play didn’t produce any points toward the Giants’ 17-14 upset itself but contributed to the win. On a 3rd and five at his own 44-yard line with just 1:15 left in the fourth quarter and the Pats holding a 14-10 lead, Giants quarterback Eli Manning took the snap in shotgun, narrowly avoided a sack, and launched the ball to receiver David Tyree at New England’s 24-yard line. Tyree used his helmet to assist in bringing the ball down.

Four plays later, Manning would connect with Plaxico Burress for the game-winning touchdown and keep the 1972 Miami Dolphins as the only team to record a perfect NFL season. Tyree has become a hero for Giants fans and everyone who loved seeing New England foiled in that game.