It’s the first state where Betr is taking bets. The high-profile brand, while headlined by Paul, is run by founder and CEO Joey Levy. In a company statement, Levy said Betr was “thrilled” to launch in Ohio.

“This launch marks the beginning of our gradual, methodical approach to state-by-state expansion where we will take the time necessary to discover and validate product-market-fit of our highly differentiated product experience to ensure we scale in a profitable manner.”

The app, which provides bettors a chance to place micro bets on the outcome of in-game plays, broke onto the Ohio sports betting scene last year when Betr announced it signed a 10-year deal with Hall of Fame Resort & Entertainment Company.

Paul does very few things quietly, and that’s certainly not the case with Betr. The Ohio sports betting app kicked off its launch with a tantalizing promotion.

To announce the promotion, Paul posted a hype video to YouTube. Paul’s brother Logan was filmed being pulled through the snow by a rope attached to a four-wheeler. Logan said as he bounced along through ankle-deep snow:

“We have an important announcement for you fellow Ohioans who love being pulled behind a four-wheeler on sleds in the middle of winter. One of y’all are about to win $1 million.”

The video cuts to Jake sitting in his living room. He explains the new promotion while his mom films him. The video is laden with love for Ohio, the Pauls’ home state.

“I couldn’t be happier that my home state of Ohio is the first to receive access to Betr’s real money gaming product,” Jake said. “People are going to love watching and rooting for bets tied directly to their favorite players…Betr makes every game more fun by adding these stakes throughout.”

Up until the company’s full launch, it offered a free-bet, non-money version of the app. 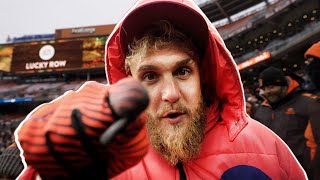 What makes Betr relatively special is that it focuses on offering micro bets. As the company put it last year, it sees itself as the Tik Tok of sports betting.

Basically, bettors can gamble on the outcome of every play in a game. Traditionally, prop bets for player performances tend to draw the most intrigue.

However, introducing play-by-play gambling gives bettors a chance to experience constant action during a game.

“What we launched today is not a sportsbook – this is something new, different, and interesting – which is what this industry needs,” Betr Head of Product Alex Ursa said when the app launched.