Horseplayers are apparently losing one of their most successful compatriots and outspoken advocates.

Michael Beychok, the 2012 National Handicapping Championship winner and a handicapper for the New Orleans Times-Picayune told the Thoroughbred Daily News that he’s become so disillusioned with the sport that he’ll shift his focus to the newly legal daily fantasy and sports betting options in Louisiana.

Beychok last year filed a class-action lawsuit on behalf of gamblers who claim they lost winnings when Medina Spirit retained the Kentucky Derby win despite a failed drug test that led to a multi-state ban for trainer Bob Baffert. The handicapper had runner-up Mandaloun winning the Derby for what would have been more than a $50,000 payout. Medina Spirit tested positive for betamethasone, which is banned on race day.

Beychok said he’ll likely only make horse bets when visiting the track because he’s soured on the culture and business of the sport.
“I’m just fed up with the drug cheating,” Beychok told TDN. “I’m fed up with the takeout. I’m fed up that we apparently can’t get into a position to implement new and better drug testing.

“I have more outlets now to gamble. I live in Louisiana, which was a state, up until last year, where the only thing available was horse racing. Now, there is daily fantasy sports, which I enjoy, and the takeout is much, much better. Soon we will have online sports betting. I am a consumer. I have just found better products.”

Horse racing as a business appears to be losing a prominent practitioner to sports betting just as it attempts to use the burgeoning enterprise to save itself. Racing had the national sporting conscious nearly alone in the summer of 2020 as American professional sports went on hiatus because of COVID-19 mitigation measures. There was some uptick in business, which was welcome, considering its decades-long decline. But the 2021 Derby was a costly mainstream blemish. It continues with Baffert litigating his case.

On the grassroots level, New Jersey in August led the nation in legalizing fixed-odds horse wagering, which is meant to make betting on the sport more like traditional team sports wagering. It’s too early to determine if this will stoke interest among new and more established bettors, but multiple other states are considering adding the system. Most of the world already has, with pari-mutuel wagering largely confined to the United States. 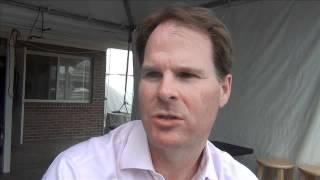