It turns out that Louisiana sports bettors love their Bayou Bengals, even if they’re just Bengals now.

With the New Orleans Saints a non-qualifier for the NFL playoffs and already amid a messy offseason, the AFC champion Cincinnati Bengals have become the wagering taste in a state where sports betting became legal in October.

The reason appears to be a simple one: Cincinnati quarterback Joe Burrow and wide receiver Ja’Marr Chase.

Burrow helmed LSU to its most recent national championship with the help of Chase, the newly minted NFL Rookie of the Year, in the 2019 season.

The pair was reunited in Cincinnati last spring as Burrow was rehabbing to return from a season-ending knee injury suffered as a rookie. Burrow, the No. 1 pick in 2020, and Chase, fifth-overall in 2021, now represent not only the AFC and the anyone-but-the-Rams crowd nationally, but the pride of a state.

“I’ve heard cool stories of people watching my game on cell phones in a basketball arena and nobody was really paying attention to the basketball game,” Burrow said during a virtual press conference on Monday.

“They were all watching the game on their cell phone and going crazy when we won. It means a lot to me the people in Baton Rouge are still supporting me the way they did when I played for them.”

Louisiana bettors are registering that support through mobile and retail sports bets. Or at least they think the Bengals (+4.5) will keep it close.

Los Angeles has its own high-profile ex-Tiger in Odell Beckham, Jr., but so far, he’s not eliciting the affection and action of his younger counterparts. According to a company spokesperson: “Curiously, the Bengals are getting bet much heavier in Louisiana on the spread, but not the money line.”
Money line nationally – Bengals bets constitute 43.4% of handle and 53.4% of bets

Spread nationally – Bengals bets constitute 44.7% of handle and 57.5% of bets

The Bengals dominated in terms of money line and handle.

LSU players were involved in four of the top five DraftKings props through Tuesday:

According to a company spokesperson,

“The support for the Burrow-led Bengals is certainly more pronounced on the spread than across the nation. The money line is very similar everywhere.”

The spokesperson added it is,

“Fair to say [there is] huge loyalty for the LSU alum(s).” 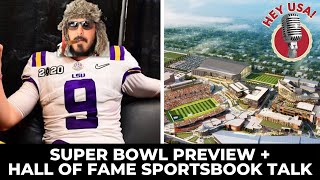