NBA star Blake Griffin has become the latest basketball player to partner with a company that dips its toe in sports betting. Sports prediction company WinView has signed the Detroit Pistons player to a series of marketing spots entitled “Blake vs. Todd.”

The premise of the campaign is fairly simple. An office worker named Todd correctly predicts that Blake Griffin will miss his next free throw. Griffin does, but Todd celebrates a bit too much.

Griffin, enraged, happens to show up to Todd’s office the next morning as the new office manager. Todd discovers that making a shot (even to the wastebasket) is not so easy when someone’s watching. 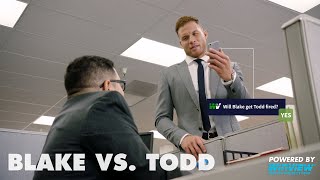 WinView’s decision to partner with Griffin makes sense. Griffin is one of the more engaging of current NBA stars, and he looks comfortable in front of the camera as an actor.

“Blake has tremendous credibility as a comedic performer with our target audience,” said WinView Executive Chairman Tom Rogers, in a press release. “His trademark dry humor in this content illustrates how every sports fan watching the game on TV is already playing WinView-even if they don’t realize it.

Okay, so what is WinView, then?

WinView is another entry in a growing list of in-game sports betting innovations. While not technically sports betting, fans compete for cash prizes that range from a few dollars into the thousands.

Essentially, each player attempts to predict the outcome of various events in a given game. The player who correctly chooses the most outcomes wins the associated prize with the contest.

The questions come live as the game progresses. The types of questions tend to be similar to in-game bets at a sportsbook, such as whether a team will complete a certain number of passes during a drive in a football game, or whether the next made basket in a basketball game will be a three-pointer.

“I’m excited to partner with WinView because they’re pioneering new ways to watch and enjoy sports,” said Griffin. “WinView provides a new and engaging way for fans to predict action live and get rewarded for their Sports IQ.”

WinView is part of a new wave of technological advances

This level of granularity in watching sports would have been nearly impossible a few years ago. However, the advent of daily fantasy sports and the coming of online sports betting in the US has triggered an onslaught of technical innovation.

Companies like WinView are pushing the envelope about what it means to watch a sports contest. They’re not alone, either.

This week, software developer SBTech unveiled its latest product, YourBet BetBuilder. The application, which could potentially show up in New Jersey soon, allows players to construct their own combination of wagers by automatically calculating the appropriate odds for the bet.

Before that, developer Kambi implemented a live ticket system on the DraftKings and SugarHouse apps that is nothing short of revolutionary. Players no longer have to wait and/or sweat the outcomes of a contest.

Instead, they can cash out their tickets at almost any time, albeit for a reduced payout. Bettors can even receive payouts on parlays without waiting to see if the final leg is a winner.

Of course, none of this innovation would have seen the light of day without the demise of PASPA. It’s amazing to see how much the world has changed, and it hasn’t even been six months yet.