The NFL season may be the best time of the year for sports bettors, but it’s a grind for the players. The regular season lasts 18 weeks, and players are tasked with playing 17 games in a taxing sport week after week.

Why not 18 games in 18 weeks? That’s thanks to NFL bye weeks, which have been a staple in the league since 1990. All teams get a week off during the season and they certainly try to use it to their advantage.

Injured players get extra time to heal up and the team as a whole gets a chance to regroup. The break can make a big difference as some squads get fully recharged and go on impressive runs the rest of the way.

Not every team is that fortunate. Teams playing well heading into the bye can stub their toes afterward while those struggling all along may not benefit all that much from a week off.

What do you need to watch out for with NFL betting odds before and after bye weeks? Here’s what you need to know.

Why are there NFL bye weeks?

Back in 1978, the NFL expanded the regular season schedule from 14 to 16 games. It remained that way until 2021 (more on this below), but a big change was introduced in 1990. The NFL schedule was tweaked to run over 17 weeks, but the 16-game-per-team schedule remained in place.

Each team was given what’s known as a bye week. The NFL had actually used the concept once before in 1966 when teams played 14 games over 15 weeks, but that would turn out to be a one-shot deal. The reintroduction of the bye week in 1990 has withstood the test of time as it remains a staple of the NFL regular season schedule. For every season since then, each of the league’s teams has had at least one week off during the regular season.

The 16-games-over-17-weeks format was the standard for over 30 years, but there were two seasons over that span in which an extra bye week was used.

As part of the new collective bargaining agreement between the NFL and its players, the 2021 schedule has been expanded to 17 games per team over an 18-week regular season, keeping the one bye week per club standard intact.

The NFL, its teams and all of the individual players benefit from bye weeks. Here are the biggest factors for each:

Which teams to bet on after bye weeks

The performance of teams varies coming off a bye week, but several teams seem to be using the time wisely. Over the past three seasons, these four teams are undefeated after a week off:

On the opposite end of the spectrum, there are four teams that are winless after the bye week over the exact same time frame:

To get an even better handle on how teams handle the bye week on an organizational level, we can adjust the timeframe even further. If we stretch the data all the way back to 2003, four teams have really excelled in winning over 70 percent of their games after a week off.

Meanwhile, two clubs have failed to break the 30 percent threshold for wins after a bye week over the same span of time.

Add it all up, and there can be an advantage for certain teams after a bye. However, it all ultimately comes down to how things are going on an overall basis, as well as the strength of coaches. We’ll have some more insight on how a coach can impact bye weeks in a bit.

Since 2002, and not including games when two teams playing one another both come off a bye, teams playing at home after taking a week off have won just 52.7% of games ATS. Visiting teams, meanwhile, have fared only slightly better: winning 58.3% ATS.

As it pertains to favored and underdog teams:

NFL teams before a bye week: Which way is the arrow pointing? For some NFL teams, a single season can be a tale of two seasons. Teams that start off well may not live up to the hype later on in the season; those that get off to slow starts can turn things around as the year progresses.

Bye weeks are a big factor to consider in that regard. In general, there are three situations at hand for teams as they approach their bye:

As teams approach their bye weeks, it’s also an opportunity for bettors to gauge where things stand. At all points of the NFL regular season, you should begin your approach to each matchup by assessing the overall strength of the teams involved.

When the bye week is coming, it’s a great time to go even further and take a more detailed look at how the team has performed to date. Here are a few of the big things to consider:

Examining each of these factors will give you a good sense of the actual state of the union for each club. As the teams head into the bye week, those that have a good deal of momentum can enter the game before a bye week on a mission.

By contrast, those that are struggling may already be looking ahead to some much-needed rest. A very flat performance could be in the offing for the team’s last game before a break.

From a betting perspective, here’s how you can take all of that information and use it to your advantage.

It can be tough to consistently beat the point spread in NFL betting, but little factors such as these can make a difference on winning and losing tickets for teams heading into a bye.

NFL teams after a bye week: Coaching is everything 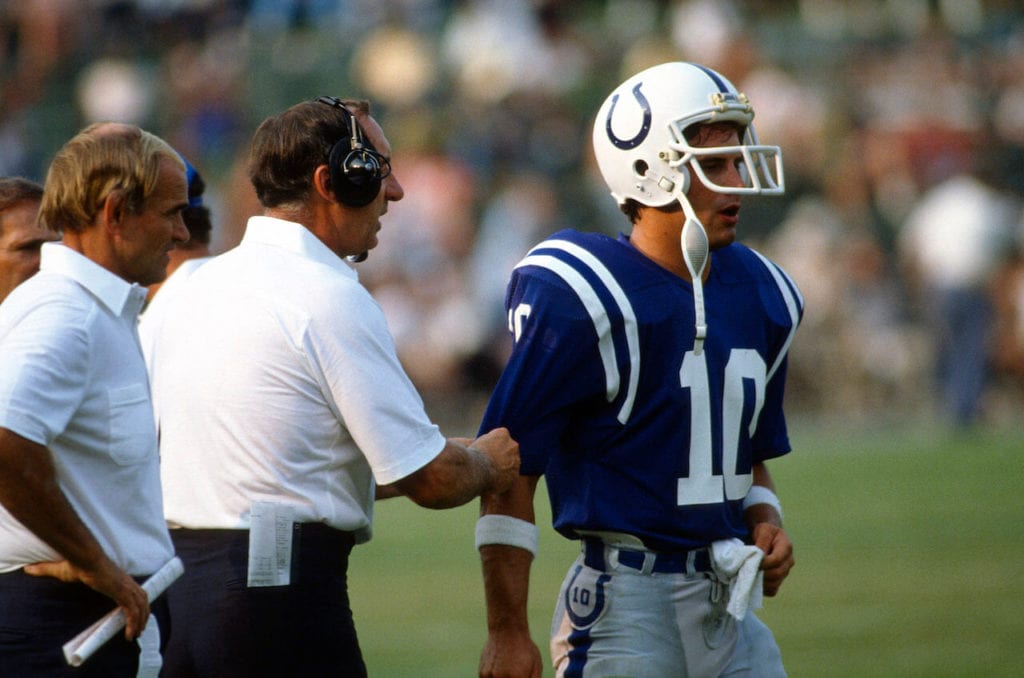 While it’s impossible to take a deep dive into the mindset of each and every player in the league, we can look toward a common denominator on how teams perform out of a bye: coaching.

Each NFL season is different from the ones before and those to come, but there are trends we can watch in this regard. Quite simply, there are some coaches who have historically nailed it after a break. Others? Not so much.

Over the past three seasons, there are nine NFL teams that have won 75 percent or more of their games after a week off (including the NFL playoffs): Here they are along with their straight-up record after the bye and current head coaches.

Notice a pattern here? These are some of the top head coaches in the NFL, and the majority of these squads have regularly been in playoff contention in recent times. For a differing perspective, let’s consider the teams that are winless after a bye over the last three seasons.

A few points to keep in mind:

The remainder of the teams in the league are in the middle after bye weeks, with winning percentages ranging from a low of 33.3% to a high of 66.7%. For a general rule, focusing on the two extremes — high and poor performance — can be a good indicator of how teams may perform after the week off.

Additionally, remember to go back to the same principles you considered for teams approaching bye weeks. The overall trajectory of the team in question should be one of the top factors you consider. As for specific situations to watch out for, here’s a shortlist to keep in mind.

It’s important to remember that there are no guarantees when it comes to following NFL betting systems and tips. However, adhering to tried and true principles can lead you toward more wins than losses, which is what it’s ultimately all about with NFL betting.

As mentioned, there are certain coaches who excel after a week off. Don’t worry — if a game like that is approaching, you’ll hear plenty about it in the run-up to the game. For example, after a bye week for the New England Patriots or Kansas City Chiefs, you’ll hear tons of chatter about how strong Bill Belichick and Andy Reid have historically been after the bye.

Those can definitely be useful trends to consider, but going even deeper can uncover a lot more that aren’t as widely well-known.

Sticking with a three-year timeframe, let’s consider how each of the league’s teams has performed on a straight-up and ATS basis in certain key situations. Here’s the legend for the below table, which covers the 2018-20 seasons and includes postseason records for teams that qualified.

As you examine the above table, you’ll notice that there are a number of intriguing trends to consider for teams as they come across the above situations during the course of the season.

However, it’s important to keep in mind that each NFL game is an individual event and should be treated as such. NFL betting trends for bye weeks and with rest advantages or disadvantages shouldn’t be the overriding factor in your decision-making.

Each of the league’s 32 teams will now play a 17-game schedule over 18 weeks. Here’s how the 17 games are broken down for each squad.

Heading into each season, we know for a fact that each squad will have six games versus divisional foes. As part of the NFL scheduling format, we also know in advance of the schedule release what the intra- and inter-conference pairings will be for the coming season. Here’s what they look like for 2021.

Armed with all of this information, we can figure out the opponents for each team in advance of the schedule’s release. For example, here are the teams that the defending Super Bowl champion Tampa Bay Buccaneers play in the coming year.

As for 2021 NFL bye weeks, here’s how it breaks down on a week-by-week basis for the number of teams with the week off:

With the addition of the extra game thrown into the schedule, then we will now have all 32 teams in action for the first five and last four weeks of the 2021 NFL regular season.

How are NFL bye weeks scheduled?

Putting together the NFL schedule each season is a herculean task. Each of the league’s teams play 17 games over a 18-week schedule, which works out to a grand total of 272 regular season games.

Figuring out who plays whom each season has been broken down into a science. But the logistics of putting it all together fairly is far from a piece of cake. There are myriad factors to consider, including:

All of those pieces of the puzzle are factored into the equation, as are many others. There are so many variables to consider that trying to do it all by hand would be a fool’s errand.

To that end, the word is that the NFL uses hundreds of computers to spit out thousands of possible schedules. Once all of the possibilities have been laid out, the task of zeroing in on the best possible schedule begins.

It’s a big job, especially when you consider that each of the main factors has a number of sub-factors to consider. For bye weeks specifically, the schedule makers need to consider things such as:

For the first item on that list, teams that had a bye week earlier in the previous season will receive priority consideration for a later bye the following year.

Travel is always a big sticking point, so the NFL does its best to avoid placing too much of a burden on the individual teams such as consecutive cross country trips or extended periods away from home. Naturally, that doesn’t always go off without a hitch. There are often teams that get the short end of the stick in that regard.

In addition, international games add a whole new wrinkle into the equation. Teams tasked with playing in another country will generally see their bye the week after that game. That said, some of the more prevalent ones are certainly worthy of being included in the weekly research puzzle.