The Super Bowl MVP Award is bestowed upon the player who has the biggest impact on the outcome of the game. While it may just be the icing on the cake for a player who has just experienced his most memorable career milestone, there’s a lot of personal pride involved in winning MVP, too.

There are 55 Super Bowls already in the annals of history and an equal number of players who have their name attached to football lore forever with an award-worthy performance on the game’s biggest possible stage. Predicting the winner of the MVP trophy is always one of the favorite Super Bowl prop bets and there are undeniably some heavy favorites worth a look going in.

For a crash course on more football gambling terminology and bet types, visit our how to bet on the NFL guide. See here for this week’s live NFL odds. 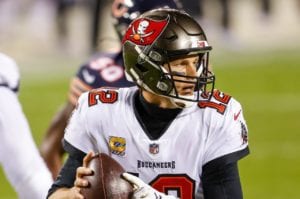 Unsurprisingly to some, Tampa Bay quarterback Tom Brady was the 2021 Super Bowl MVP as he led the Bucs to their first Super Bowl win ever. It was also the 9th time in 12 years a QB won the award.

The last time a non-QB won the award was in 2019 when WR Julian Edelman, on the receiving end of Brady, pulled it off. It was the first time a wide receiver had received the MVP since 2009.

Santonio Holmes won it that year for the Pittsburgh Steelers, who defeated the Arizona Cardinals by a score of 27-23 in Super Bowl XLIII, which was played at Raymond James Stadium in Tampa.

Let’s take a look at those who have won the award since Holmes:

Who is the most likely MVP when favorites or underdogs win the Super Bowl?

For a correlation to the MVP award, the spread and total results can matter somewhat, but the biggest needle mover comes from which team seals the deal: the favorite or underdog. Here’s the complete breakdown of the 56 winners by position for the moneyline outcomes.

Meanwhile, defenders and receivers are more likely to fit the bill when the favorite wins the game. While we don’t walk away with one definitive strategy from this exercise, we do gain some very interesting food for thought on the players to focus on in relation to our pregame calls on who will win the game.

So when it’s time for the Super Bowl, just bet on both QBs to win MVP and call it a day, right? Not exactly. You can certainly find some winners that way, but there’s no guarantee that you’ll be profitable due to varying odds. Instead of taking out the abacus to find a way to make that strategy work, use the following three tips to find some winners.

Project out the game

If you know the spread and the Over/Under, you can figure out the projected score for an NFL game pretty quickly. There are also plenty of sites that do it for you. Either way, take what the oddsmakers are telling you and use that to try and envision how the game might play out. Do you agree, or are you seeing something different from what the odds say?

Each team has playmakers on both sides of the ball. The QB controls the offense and is an obvious choice, while the skill position players who see the most work also fit the bill. On offense, also look for the players who can break off big plays. As for defense, the players who force turnovers, generate sacks, and make a lot of tackles could be in line to make some game-breaking plays.

Make your calls on the pregame bets

Before trying to bet on the Super Bowl MVP, make your calls on the moneyline, spread, and totals – even if you don’t plan on betting on all three. By doing this, you’ll have a more concrete stance on how the game projects to play out. From there, make your selections from the most viable contenders on the side that you think is most likely to win.

To that last point, there’s nothing written in stone that says you only have to make one wager on Super Bowl MVP. In fact, many bettors spread out the risk with several calls on the game. If you budget correctly, you can come out ahead if one of your multiple selections goes on to win.

Is a QB the best bet for Super Bowl MVP?

It’s clear that QBs win the Super Bowl MVP award often. That being the case, there’s no way to say that betting on one of those players to win is a bad call. However, there is something to be said for spreading out the risk – and for trying to sniff out an unexpected winner.

When you look at the Super Bowl MVP odds board, the QBs will be the favorites. As you head further down the board, you’ll find more favorable odds for other position players. Trying to cover all of the possible bases can quickly turn into a bankroll drain, but you can spread out the risk with some other viable contenders.

As a quick example, you can bet on the QB of the team you expect to win, and then pick out the other players that you think will have the most impact on offense and defense. Just like that, you have three bets in play. If you nail one of them and budget correctly, you can still come out ahead.

Bart Starr led the Packers to victory over the Chiefs in the first edition of the big game. The quarterback earned the first NFL Super Bowl MVP Award for his efforts.

Tom Brady, the quarterback of the Patriots, is at the top of the list with five MVP awards. No other player has reached that mark. Joe Montana, the former star quarterback for the 49ers, is next on the list with three.

Yes, and this is not as uncommon as you may think. Through 53 Super Bowls, a defensive player has won it 10 times.

Linebacker is the most awarded position on defense with four MVP awards. Defensive ends and safeties have won two each, while cornerbacks and defensive tackles have one apiece. The most recent defensive player to win was linebacker Von Miller of the Broncos in Super Bowl 50.

Running backs and wide receivers are next on the list with seven each. Over the last 10 Super Bowls, a quarterback has been selected as MVP seven times.

Yes, this happened once. In Super Bowl V, the Cowboys lost to the Baltimore Colts by a score of 16-13.

Dallas linebacker Chuck Howley had a fantastic game with two interceptions, and he received the award for his efforts.

The Steelers and the Patriots are up next with six each. The next team on the list is the 49ers with four MVP trophies.

Initially, it was known as the Super Bowl MVP trophy. As of Super Bowl XXV, it is called the Pete Rozelle Trophy. Rozelle was NFL commissioner from 1960 through 1989, leading the league through a tremendous growth spurt.

There have been times when the Super Bowl MVP award winner has been rather clear cut. Others? Not so much. Beyond the general complaints of a QB winning it way too often, there have been some real head-scratchers from voters through the years. Here are three of the most notable.

Whenever there’s money on the line, there will undoubtedly be some folks who are unhappy with the results. Since the MVP award is in the hands of voters, even more frustration can ensue. Here’s to hoping that they get it right more often than not in the future.

The history of the Super Bowl stretches all the way back to 1967. The Green Bay Packers defeated the Kansas City Chiefs by a score of 35-10 at the Los Angeles Memorial Coliseum. The game was dubbed as the ‘First World Championship Game’ between the rival AFL and NFL. At the game’s conclusion, Packers QB Bart Starr was named MVP.

There have now been 55 editions of the Big Game and a corresponding number of MVP award winners on the grand stage. The NFL itself has evolved tremendously along the way. Dynasties were relatively common from the early days into the 1990s, but back-to-back winners have become increasingly rare in the modern era.

As you saw when we walked through the Super Bowl MVP betting trends above, the award itself has seen some changes. While QBs have always won their fair share, other positions have seen some ebbs and flows through the years.  Along the way, we’ve also seen several surprises with some unexpected winners hoisting the hardware.

The NFL Super Bowl MVP Award made its debut the same year as the big game itself.