There was anxiety in some Forum offices in 1979 when Los Angeles Lakers owner Dr. Jerry Buss pinned so much hope on a certain rookie. It worked out — and then some. Magic Johnson validated his owner’s faith immediately and became a champion, an MVP, and one of the greatest players in NBA history.

It was an entirely different and more terrifying matter for Max Borenstein in casting an ex-jock with no major acting credits in the role of the Hall of Famer in the upcoming HBO Max docu-series “Winning Time: The Rise of the Lakers Dynasty.” The “Godzilla” writer/producer had ten episodes to make this work.

But the trepidation was warranted. Borenstein, the show’s co-creator, also had an acting rookie, albeit a former captain of the UC Berkley men’s basketball team playing a pivotal role as Kareem Abdul-Jabbar. And he had a cast of decorated and seasoned actors like John C. Reilly (Buss, above left), Sally Field (Jessie Buss), Adrien Brody (Pat Riley), and Jason Clarke (Jerry West) to perhaps unintentionally contrast just how raw Quincy Isaiah (Magic Johnson) and Dr. Solomon Hughes (Abdul-Jabbar) were.

It was enough, in retrospect, to make Borenstein appreciate just how much he loved the project, which debuts on March 6.

“Had I thought about how unrealistic it was to expect to find these people, I don’t know that I would’ve rationally taken on the project,” Borenstein told PlayUSA during a media junket promoting the series. “But when falling in love with something, you have these nice blinders on and you just go head-first. And then we got lucky.”

Actors portraying Johnson, Abdul-Jabbar bring everything to roles but experience

Isaiah is 6-foot-3, roughly a half foot shorter than Johnson. Hughes is 6-feet-11, about two inches shy of Abdul-Jabbar. But their otherwise remarkable physical similarities and portrayals, in conjunction with production wizardry, make it work. Hughes projects the brooding Jabbar and Isaiah the effervescent Magic to fill on screen the very large spaces they commanded in basketball lore.

Borenstein and Barnes sometimes can’t help but chuckle when considering what casting directors Francine Maisler (“12 Years a Slave” and “The Revenant”) and Melissa Kostenbauder brought them.

“It’s hard to imagine. One of those roles would be the hardest role you ever had to cast, for a lot of people,” Borenstein conceded. “I think finding an actor who can portray an iconic figure like Magic Johnson, like Kareem Abdul-Jabbar, can look like them, can play basketball – believably – has the height and has the specific personality type…”

“Magic is as charismatic as the most charismatic movie star. That’s not something you can act. That you have to have. Quincy Isaiah has it. Kareem Abdul-Jabbar has to have the gravitas and intellectual heft…”

“Introspection,” Borenstein continues, “that very few people have, not to mention, also seven-foot-tall, looks like Kareem and can play basketball. And Solomon Hughes has a doctorate in education policy, who played for the Globetrotters…”

“And loves jazz,” Bornstein concludes, thrusting his palms for emphasis.

This had been a good draft. Isaiah’s backstory fits well with his casting in what he calls a “dream come true.” He’s a former high school athlete from Muskegon, Michigan, about 100 miles from Johnson’s hometown of Lansing, and claims “the first thing I ever wanted to do was play basketball.”

But after the 25-year-old earned his second IMDB credit, he needed some coaching from former Laker and actor Rick Fox and a YouTube tutorial and Johnson’s autobiography to learn what the five-time NBA champion actually could do with a basketball. And what he meant to the sports culture of the 1980s and beyond.

“Mostly, the things that I used to hear about Magic, it was mostly about him just coming from Michigan and being great at basketball,” Isaiah told PlayUSA.

“But you don’t know until you get to see it. We have YouTube now where you can go look at his highlights and just see how electric [he was], or how much the fans were in it, and it was a lot of passion going into the sport that I didn’t realize wasn’t as much there beforehand. … It was cool to be able to relive that and find that out along the way as I was doing it.”

Isaiah’s sports hero as a kid was Laker. But it was the iconic Shaquille O’Neal, who was a cog in the next iteration of a Laker dynasty in the 2000s with Kobe Bryant. For Isaiah, Johnson is much more a character than those with waking memories of his exploits and, inevitably, his HIV diagnosis in 1991.

“I knew Magic played for them, and I knew he was one of the greatest players of all time, but I just didn’t know the type of influence he held as a player,” Isaiah admitted. “I knew him as a businessman more. I knew that he had made Starbucks a household name, or helped that become that way, and the 24-hour fitnesses and the movie theaters. I didn’t realize just how influential he was to keep basketball alive.”

“That came once I actually booked the role, knowing that side of him.”

Solomon Hughes was the Globetrotter, Ph.D. post player yearning for stage and screen An instructor and faculty affiliate at the Samuel DuBois Cook Center on Social Equity at Duke University, Hughes, 43, is a man accomplished in many things but very much wanting one more: acting. He was inspired to pursue a career on screen or stage in part because of a bloodline to the business.

And because it inspired him so much.

After finally landing the role of a lifetime – literally the role of his lifetime in terms of television or cinema – Solomon speaks in rapid un-Kareem-like tempo when describing what this means to him.

“I grew up in a family where we were very aware of the arts,” he said. “We watched the Cosby Show religiously. Ethel Ayler, who played Claire Huxtable’s mother … my great, great grandfather was her grandfather. And so there was always this family connection to film and TV, and I’d always been obsessed with the space. And I went as far as after I graduated from college, I moved to LA and met with a talent agent. Nothing came of it.” 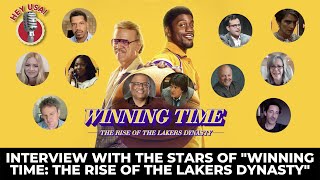 “And so I played professionally for a few years and I feel like I’m the kind of person that just wants to find workspaces where I really can connect my passions to what I’m doing. And just to get the opportunity to audition was really a dream come true because my life has personally been deeply impacted by the work of people who are actors.”

Co-star Brody was one of them in particular.

“I’ve taught on a college level, I’ve taught on the high school level and those are traditional learning spaces,” Hughes said. “But when I think about what I’ve learned sitting in the theaters or sitting in movie theaters or sitting in live theaters …. I’m putting Adrian on the spot, but when I saw ‘The Pianist,’ that’s one of a handful of films where after I saw it, I went out of my way to make sure other people saw it because it literally changed my life. So yeah, it’s a space that I’ve had just such reverence for.”

Though Hughes checked many boxes with his physique and basketball history, he still had work to do. He said he perfected Abdul-Jabbar’s iconic hook shot by practicing “religiously” in parks, in gyms where he had to constantly rebuff pleas for the 7-footer to join pick-up games. One day, an approving nod from an “older gentleman” finally validated his efforts.

But the acting game — the part they couldn’t work around or fake — that impressed, and maybe relieved, Barnes the most.

“I think it’s a testament when you look at those first five episodes, to how hard both of those guys worked to get their game to the top levels,” Barnes said, referring to their portrayals.

“You wouldn’t think that they had never acted before when you watched this show.”

Listen to “The Stars of “Winning Time: The Rise of the Lakers Dynasty” | HeyUSA! Interview” on Spreaker.