Nobody, least of all anyone attempting to forecast an upcoming NFL season, is perfect. But when someone has a platform for the whole world to see, they should be held accountable for their constant failed attempts to predict the NFL season, which are seasoned with irrational hot takes and opinion-based nonsense.

But let’s face it, it’s not about being right or wrong, it’s all about one-liners and attention-grabbing statements that fuel the viewers.

The losers of sports media

But right here, days after Super Bowl 54, we’re calling out the top three biggest losers in sports media when it came to predictions and hot takes this NFL season.

You know who you are.

No matter how ridiculous or irrelevant their arguments may have been, these “shock-jock” sports media personalities always attempt to paint their versions of the truth throughout the entire NFL season.

So, after doing a little research, I found some of the more obnoxious and idiot predictions of the season. It’s time to expose how wrong these so-called experts really were. Enjoy!

Skip is the king of bad takes. Although he dominates the ratings, he is, without question, the most obnoxious sports media personality on TV. He rarely makes a valid point without contradicting himself and feeds off his ability to instigate at all costs.

Dak Prescott is so much better than Carson Wince.

Even Stephen Smith chimes in on the Cowboys:

Colin Cowherd is all bark and no bite.

He’s louder than everyone else in the room, but what he shouts is usually utter nonsense. He hangs up on anyone who disagrees with him, and he is prone to embrace the most brain-dead sports cliches.

Early in the NFL season, Cowherd stated that:

I finished the year 50-36 ATS, just crushing @ColinCowherd. Which means he owes me one of his paychecks, so by my calculations he owes me around $270K. I accept Venmo, CashApp or PayPal.

Kellerman is the No. 1 Carson Wentz hater in the world. He may have a decent amount of knowledge of boxing, but as you can see below, he has no business being in the NFL media space.

Dan Orlovsky was beating up on Kellerman all season on the subject of Wentz, but the victory celebration didn’t stop there. Following the Eagles’ win over the Cowboys to help them win the NFC East, Orlovsky appeared on Get Up! for an airing of grievances aimed at his dumbfounded colleagues.

.@danorlovsky7 is calling out some 🗑 opinions and NO ONE IS SAFE! pic.twitter.com/XOkQ5Wlwv7

.@maxkellerman and @stephenasmith got INTO IT when asked if the Eagles should sign Antonio Brown 😳 pic.twitter.com/Z6GBFOMmGa

Kellerman being wrong about Tom Brady: 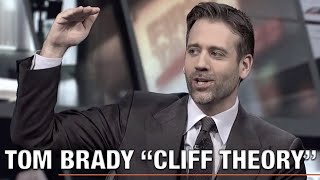 Pete Amato is a huge Philadelphia sports fanatic with 8+ years of experience writing, producing, and managing creative content throughout all mediums. He has had the opportunity to implement creative marketing strategies for a variety of sports betting and online gaming platforms, as well as all throughout the online casino industry.

View all posts by Pete Amato