Former Secretary of the Dept. of the Interior Ryan Zinke might not ever face any criminal charges for possibly lying to investigators working for the department’s Office of the Inspector General (OIG), but that doesn’t mean the deception didn’t happen. Additionally, a public report detailing Zinke’s alleged actions cast doubt on the legitimacy of a decision regarding a tribal casino in Connecticut.

The OIG released the report on Zinke’s potential deception Wednesday. However, it doesn’t mean the plans to open a third casino within Connecticut’s borders will spring to life again.

The OIG for federal agencies like the Dept. of the Interior is essentially a watchdog division of the department. On its most basic level, Wednesday’s release alleges Zinke and his unnamed chief of staff “made statements to OIG investigators with the overall intent to mislead them.”

The investigation involved joint plans by the two tribal casino operators in Connecticut, the Mashantucket Pequot Indian Tribe and the Mohegan Tribe. They had submitted collective plans for an off-reservation Connecticut casino they would share the ownership of as amendments to their existing gaming compacts.

The DOI took no action on the plans, stating because the tribes planned to operate the casino on non-tribal lands, it had no jurisdiction over the matter. The OIG opened its investigation of that decision not long thereafter. As Wednesday’s report states, once the OIG concluded its investigations, it referred its findings to the US Dept. of Justice.

However, Justice chose not to act on the findings in 2021. Regardless, the findings are now in the public domain for evaluation now.

Background of the tribal casino situation

Zinke assumed office as the Secretary of the Interior in March of 2017, nearly three years after Connecticut and the tribes had started making plans for the casino. The events that the OIG investigated and Zinke allegedly lied about occurred almost immediately after Zinke took office.

This isn’t the only thing that Zinke has been investigated over concerning his time as Secretary of the Interior. There was also a land sale and a private chartered flight that came into question. 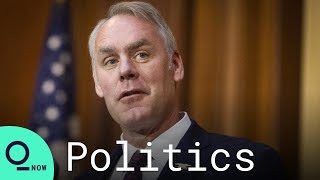 Over the first six months of his tenure, the report says Zinke met with lobbyists hired by MGM, which operates a casino in Springfield, Massachusetts. That casino is very close to the proposed site for the tribal casino in Connecticut. At the time, the casino’s construction was nearing completion, and it opened in August 2018.

Prior to those meetings, the DOI seemingly looked at the tribes’ plans favorably. A letter from the DOI to each of the tribes stated concurrence with an earlier correspondence that the new plans “would not affect the Tribes’ respective exclusivity gaming arrangements with Connecticut.”

However, the DOI in September of 2017 simply returned the amendments to the tribes with no judgment. Nick Juliano of Politico reported that the decision not to weigh in on the matter was contrary to advice “from federal experts on Indian gaming policy.” Essentially, MGM might have gotten exactly what it paid lobbyists for.

Details of the allegations against Ryan Zinke

The OIG interviewed Zinke and his chief of staff in May and July of 2018. The report says Zinke told investigators he never discussed the tribes’ submission with an unidentified US Senator or the lobbyists MGM employed. Instead, Zinke claimed he relied on counsel from lawyers for the department in making the decision to return the proposals.

However, counsel for the Interior “denied discussing Secretary Zinke’s concerns.” Additionally, the report reveals both emails and text messages confirming contact between Zinke, the Senator, and lobbyists.

In May of 2017, the same political consultant sent a text message to the same lobbyist, expressing “he regularly ate dinner with Secretary Zinke…and that he discussed Casino’s arguments against the Tribes’ amendments with Secretary Zinke during one or more of those dinners.”

The Senator’s testimony to the OIG also contradicts Zinke’s statements during the interviews as well. Ultimately, though, this report might serve as little more than historical context.

So, what does it all mean?

At this point, this report could simply serve as an assessment tool regarding Zinke’s character for people considering voting for him to represent them in Congress this November. As far as the tribal gaming matters go, it’s mostly irrelevant.

Shortly after Zinke left office, the DOI issued approval for the plans for the Connecticut casino. However, neither tribe has taken action on the matter since. Instead, the tribes decided to amend their compacts with Connecticut to allow for online casino and sports betting operations.

As the report states, the OIG is not commenting on the merits of the decision to return the amendments itself. Rather, it’s simply stating that in the opinion of the Interior’s OIG, Zinke and his chief of staff deceived investigators in 2018.

The DOJ has passed on prosecuting Zinke on the matter and it’s unclear whether the state of Connecticut or either tribal gaming authority has any interest in pursuing civil claims against Zinke. For gamblers in Connecticut, this report is part of the story of why a third casino in their state has yet to materialize.