US casino visitors are finding a new skill-based game on their next trip to several major casino properties. Unlike previous skill-based games that most people walk by, this one has a very familiar theme that might cause patrons to stop and give it a try.

Roughly one year after G2E 2017, not one, but two different versions of Deal or No Deal Poker have found their way onto the gaming floor of several popular Las Vegas, Nevada casinos.

Per a press release by Gamblit Gaming:

Where to play these casino games

According to Gamblit, the Model G are now live at Caesars Palace, Paris, Planet Hollywood, Harrah’s Las Vegas, the Flamingo, The LINQ and MGM Grand, as well as other locations across the country.

The TriStation version of the game is available at The LINQ, Planet Hollywood, MGM Grand, the Flamingo, Harrah’s Las Vegas, Bally’s Las Vegas, The Orleans and more.

A multiplayer Deal or No Deal Poker game

Gamblit describes its multiplayer Deal or No Deal Poker Special as, “Players compete to uncover the highest value briefcase in the ultimate challenge of striking a deal to win big or risk it all.”

Here’s how it works.

The Model G game table the game is played on accommodates up to four players. At the start of the game, each player places a wager and chooses a briefcase. Only the winner’s briefcase will be revealed at the end of the game.

After that, the game begins.

Cards appear in the middle of the table and players can ignore them or grab them (the first player to grab the card receives it) in order to make a five-card poker hand. At the end of the round, the best poker hand wins. However, the game is not over at that point.

Like Deal or No Deal, the player still doesn’t know what’s in their briefcase (their winnings) and is offered a deal by the banker. The deal offered is based on the briefcases selected by the players at the beginning of the game, so it could be high or low. The player can either accept the offer or open their briefcase. 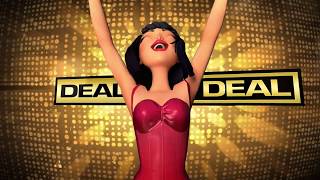 Single player TriStation version of Deal or No Deal Poker

Unlike the competitive Deal or No Deal multiplayer game featured on the Model G table, Gamblit’s TriStation games are single player. They use a standard video poker style payout table.

The single-player TriStation version is more like classic video poker. Instead of grabbing cards from the table, the player is dealt a five-card hand and can either hold or discard each card. 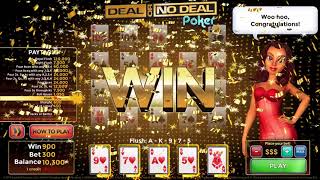 More new games on the horizon

Another popular Gamblit game at G2E 2017 was its multiplayer Pac-Man tables. These are also apparently being converted to the single-player TriStation format.

After the launch of Deal or No Deal Poker, both versions of Pac-Man are likely to land on casino floors soon.