GeoComply’s Anna Sainsbury has returned as chief executive officer of the geolocation fraud-prevention and security company she co-founded in 2011. She takes over for David Briggs, who has held that position since 2018. Sainsbury most recently served as a GeoComply chairman.

Briggs said in a release:

“After four incredible years as CEO, I am looking forward to supporting Anna as she steps back into the role she was born to have. Anna is a natural born leader and visionary and I have every confidence that her passion and dedication will take GeoComply to new heights.”

Sainsbury, one of a small but growing number of females in leadership positions in the gambling and gambling-adjacent industry, was the CEO of the Vancouver-based company for its first seven years.

GeoComply’s reasoning in an increase

According to a company release, GeoComply’s revenues increased  “1500%” during Briggs’ tenure, the end of which coincided with the repeal of the Professional and Amateur Sports Protection Act in 2018 and the spread of legal sports betting in the United States.

GeoComply holds a virtual monopoly in the US providing “geofencing” to states that have legalized mobile sports betting. Moreover, it’s to ensure that wagers are placed in legal jurisdictions. It’s a complex process crucial to the industry.

According to a release, GeoComply software is installed worldwide on more than 400 million devices. Furthermore, it analyzes more than three million transactions per year.

Briggs will continue with the company, according to a release.

“David will continue to be an essential part of the company by dedicating himself to special projects. Not least by providing core leadership on GeoComply’s future in fintech. He will also focus on managing and delivering innovation on the product front and will take a central role. In consolidating our internship and graduate recruitment programmes to secure a bright future for our team’s growth. His leadership has seen GeoComply through a transformative period as the business has expanded into exciting verticals and received institutional investment.”

Who is Anna Sainsbury?

Sainsbury, a former commercial director at TST, is the RBC Canadian Women Entrepreneur Award winner. In addition, she was previously an RBC Momentum Award finalist.

A former interior design student and insurance broker, the Vancouver native, entered the digital realm by working for an international technical testing company “specializing in online gaming,” according to BCBusiness.ca.

Furthermore, she launched GeoComply with Briggs in 2011. 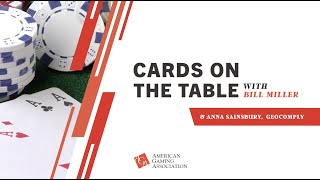