There are now a few people we know for sure who won’t make any sports bets in Ohio.

We still don’t know exactly what everyone else can bet on.

Citing concerns of potential harassment and addiction, Ohio State University has requested that the Ohio Casino Control Commission (OCCC) limit what college sports residents can bet on when sports betting goes fully live in the state.

The letter was authored by OSU Vice President for Government Affairs Stacy Rastaukas Bretherton, asking the OCCC to limit college sports wagering to football and basketball only and prohibit any prop bets.

“Our concern is for the student-athlete,” read the letter.

“Allowing an in-game bet on a kick or a free throw can lead to very bad outcomes for the athlete regardless of his/her success due to the ability of angered bettors to anonymous threats and ridicule via social media platforms.”

The Ohio State letter also suggests that any member of an athletic department should not be allowed to wager, and any bettor involved in coercion or obtaining inside information be punished.

Ohio Governor Mike DeWine signed a bill approving sports betting for the Buckeye State starting no later than Jan. 1, 2023. The OCCC is currently working on the rules to govern the activity.

The idea of limiting wagers for in-state players has to do with bet fixing concerns, especially prop bets, where it could theoretically be easy to entice a college student to miss a free throw or two without impacting the outcome of the event. The idea is also that only the state’s residents would have easy access to that college student.

“Both athlete and non-athlete students will be exposed to undesirable behaviors surrounding wagering on collegiate events.”

At its April 20th meeting, the OCCC passed a resolution banning any committee member from placing a sports wager either in person or on a mobile app.

There are seven commissioners of the OCCC, led by Chair June Taylor, and nine members of the Commission staff. It was stated that the OCCC wants to remain completely impartial in any rulings. The next commission meeting is May 4.

Land-based sportsbooks can be located at one of the state’s four casinos, seven racinos, and 10 pro sports venues. There is pressure on the OCCC to get rules in place in time for football season. Ohio State is perennially a national championship contender in football.

Will the letter convince the OCCC?

You have to understand that anything to do with Ohio State is a big deal in Ohio politics. Ohio State is nicknamed the Buckeyes. Ohio is the Buckeye State. For a statement like this to become public indicates that it has a lot of support behind the scenes.

In the future world of sports betting in Ohio, betting on Ohio State football is the biggest piece of the pie. It’s interesting that the Bretherton letter doesn’t ask for banning wagering on in-state teams, just limiting it to basketball and football.

No one wants to take away Ohio State fans’ chance to bet on Michigan – excuse me – the School Up North game.

It is true. However, those college athletes are unfairly subjected to a world of abuse on social media for their failings. But that’s not going away even if prop bets are eliminated. 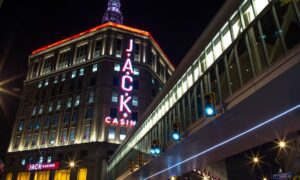