NEW YORK – Mid-day in Times Square was unfolding about as expected as Manhattan’s tacky mecca slowly regained its pre-COVID allure. Two young women struggled to synchronize their dance routine to TikTok-level worthiness. An older man pop-and-locked behind them in a serious exercise in one-upmanship.

Tourists lined up for cheap theater tickets. A huge video board overhanging the Olive Garden bragged about an NFT collection that missed its deadline five months ago.

Somewhere within the pulsating glow of these immersive, sensory-overloading blocks, one of New York City’s first casinos could open one day. A suitor had announced such plans just a few weeks earlier.

There’s a new Hard Rock hotel right there on 48th Street, and although it’s been ruled out for casino gambling, it still serves as a reminder.

But New Yorkers are already playing casinos online, even though it’s not legal here. Even with online casino gambling legal in just six states, there were always unregulated offshore options. The newest ones are comically similar to the caricature that is Times Square: overt, outlandish.

Now, metaverse casinos using cryptocurrencies and non-fungible tokens as “legal” tender dealing cards and dice to avatars reach into every jurisdiction with broadband, defying whatever and however well-written gambling laws exist.

A block away from Times Square, the idea of them commanded half of the agenda during the iGaming NEXT Conference.

Whether the metaverse as a staging area for online gambling is sustainable, possible, legal, or prudent remained a source of great speculation even after a series of panels featuring the devout and skeptical.

But real and virtual money is pouring into this virtual space. So in the gambling industry, right now, the metaverse is very real.

That doesn’t mean anyone has it figured out.

In Part 2 of PlayUSA‘s series on the gamblification of the metaverse, we explore how tech companies and entrepreneurs are attempting to draw the maps for this endless and perhaps lucrative new digital land.

Gaming giant Entain in January announced plans to invest $133 million to launch Ennovate, a partnership with, among others, Verizon. The objective: develop sports content in the metaverse and applications for NFTs, and virtual and augmented reality.

Microsoft had an acquisition of game developer Activision Blizzard for $68.7 billion approved last week. The objective: expand its presence in interactive gaming.

There are skeptics in the kitchen, though. The recent crash of crypto and NFT markets underscores their points and paints a this-is-gonna-work-right? look on the faces of true believers.

“Let’s start with my personal feelings that are not necessarily representative of Entain’s,” Martin Lycka, SVP for American Regulatory Affairs and Responsible Gambling at Entain told PlayUSA.

“I just don’t see why I would want to do what I can do in real life in the metaverse. Why would I want to go to the metaverse Starbucks if my Starbucks is a seven-minute walk from our place in that direction? There’s another one, 10 minutes in the opposite direction. But I do appreciate that lot of people out there, for a variety of reasons, I suppose, do prefer living in a virtual world.

“So from the industry and most definitely Entain’s perspective, as always, we are trying to cater to the needs and wishes of our customers. So we’ve been trying just like some other industry players, to replicate the sports betting/casino experience in the digital world of metaverse. … And I suppose it’s definitely on the rise now just like the whole younger generation of gamers.”

These new landscapes could be virtual fiefdoms for companies attempting to gain audiences and customers. Commerce can be conducted using NFTs, tokens or cryptocurrencies created specifically for each world, like MANA in the popular Decentraland platform.

There has already been legal pushback from the Texas Securities Board over the use of NFTs for casino gaming in the metaverse. There figures to be more from other states that come to grasp the economy is developing around them. And there’s always the possibility of federal intervention. In May, five states banded together to shut down a fraudulent metaverse casino with alleged ties to Russian scammers.

Of course, decentralization is supposed to be a thing here, a state of freedom where users can help build a world on web3 foundations limited only by imagination and the contents of their virtual wallet.

Mark Zuckerberg‘s well-chronicled attempts to build a very centralized metaverse have made him a virtual villain on yet another plain. “Is a betting shop for the future going to actually be headsets or 3D flat screens? We just don’t know,” Birkin conceded.

“Maybe Entain do know, or maybe they just spent $100 million on consultants telling them so.”

But there’s the concession that the demographic of customers will be young and crypto-savvy. And it appears virtual reality is the preferred route as online gamblers move from online slots to live dealer poker to “actually be there,” Birkin said. That constitutes a start.

“And suddenly if you put a headset on,” Birkin continued, “You’ve got a more immersive experience.”

“How that plays out into the kind of wider gambling, I know people who are at the Super Bowl on the VR headsets and suddenly if they speaking to people, you can be placing bets and they’re kind of sitting there at halftime, get up and go to the roulette wheel, rather than just watching, going on your sofa on TV with your phone in your hands.”

Metaverse casinos still must be rooted in terrestrial regulations

Paul Rogash certainly hopes that’s the case. The CEO of BetU‘s ecosystem of sports betting and free-to-play games hope to launch a metaverse casino resort in June designed to replicate the entire experience of jetting in Las Vegas or Macau.

“We’re actually focusing on – in terms of gaming – that specific niche, whereas a lot of other metaverses are trying to create a whole world where people build on top of that.

“We’re creating this casino floor, play-to-earn gaming levels and then the hotel, where people will be able to furnish their rooms and create their own little life there. But that’s all we’re trying to do. We’re not trying to have other people build different galaxies or townships or anything on top of our network.”

And his company, Rogash said, is concerned about where those avatars are coming from in the tangible world. Decentral Games, which is built on the Ethereum-powered Decentraland platform and is headquartered in Panama. Still, it’s readily available in the United States, where a patchwork of state laws was written before crypto or NFTs as gambling currency could have been codified. Among Decentraland’s denizens is an Atari crypto casino.

ICE Poker is the most popular destination in the Decentraland, responsible for almost a third of its 600,000 visitors. With more than 100,000 active monthly users, it had generated in excess of $7.5 million through March. The free-to-play, peer-to-peer “poker simulation” rewards winners with NFTs in a system Decentral Games took pains to rationalize as not constituting gambling.

“A big part of the issue is not many people have even a baseline understanding of the metaverse, NFTs, Web 3.0, etc.,” he told PlayUSA.

“Certainly, no one thought about these things when most gambling laws were crafted. The reality is that if law enforcement wants to go after an operator, they will do so. Time, and the courts, will ultimately determine whether existing laws are applicable, but there was long an argument about Bitcoin’s status being some kind of legal protection.

“The [Department of Justice] has had little issue finding applicable laws to prosecute people who commit crimes with or around Bitcoin. I expect the same to happen with the metaverse.” 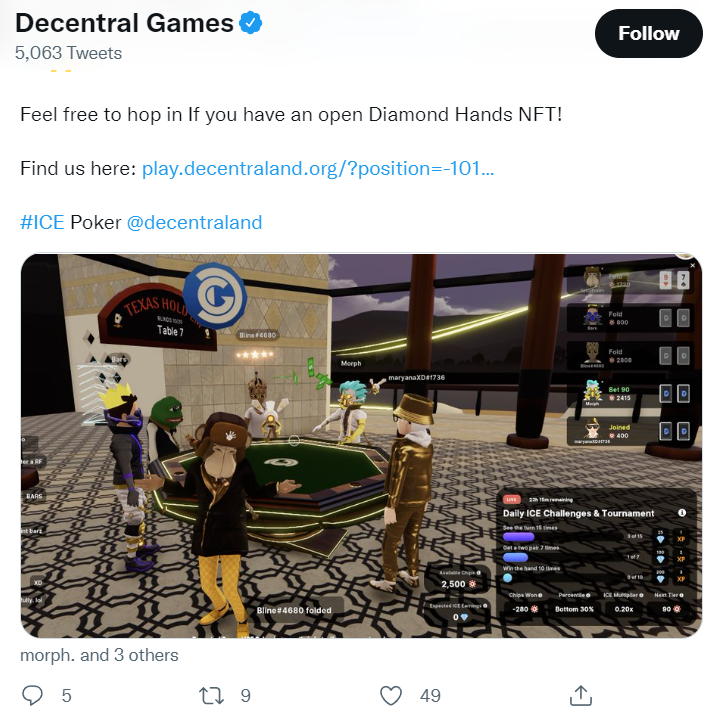 BetU Casino, Rogash said, will be based in Curacao but seek licenses in US markets when laws are amenable.

“Eventually we’d love to go for a lot of different local licenses in the USA, et cetera,” he said.

“It’s a little state-based, but at this stage would be restricted. And that’s where one of the conflicting things in the gambling space is, is there are some sort of decentralized platforms that are offering gambling services.”

“But to me, it’s just a very risky play when you’re trying to get around gambling laws, because the laws are quite strict. And the founders of things can still be liable for the actions of the company in the gambling space.

“I think it’s a pretty risky play to be just opening up these decentralized networks with especially doxx teams where people know their identity. Everyone’s got different opinions about, decentralization, can it be stopped by governments or not?”

“I think some people are trying to get around those gambling laws just based off that, but it’s not something we want to do.”

There are lots of contrary opinions in virtual boardrooms right now.