The North Carolina State crowd is pretty good, too, the manager said after sipping from a coffee mug. But the Wolfpack didn’t play until 3:30 p.m., which helped explain that only male customers occupied wood-back booths for the noon college football kickoffs this early November Saturday.

One working GameBet kiosk displayed odds by the ATM machine, a reminder that sports betting was up and running in the nation’s capital and one of the most furiously contested new regional markets in the country. Just Caesars and the lottery-run GameBet divvied up the District, but to the west across the Potomac River, seven companies – eventually as many as 18 – vied for Virginia. To the east, as many as 60 online platforms will jockey for market share whenever Maryland authorizes a launch.

This explained the agitation denizens of the ‘DMV’ have expressed over the all-out blitz of sportsbook ads during televised sporting events this fall. It has been at times oppressive, locals contend.
Noon arrived. Then … nothing. It was oddly peaceful. Peacefully without odds, that is.

Such was the case later in the afternoon at Crystal City Sports Pub, where scores of mostly men chomped pub food and positioned themselves along sightlines for the TVs that would broadcast their favored game. The nearest hint of gambling was a bartender and her barback discussing her upcoming trip to Las Vegas.

What was happening here?

It was merely a respite. With sports betting on in-state colleges illegal in both Virginia and DC, and Maryland sports betting still mired in the approval phase, operators have apparently chosen to save their ad buys for Sundays and Washington Football Team and Baltimore Ravens fans.

That day alone is enough to overload someone who thinks about gambling seven days a week.

“Come to my house on a Sunday in Arlington, Virginia and watch a football game,” said Casey Clark, senior vice president, strategic communications at the American Gaming Association.

All national viewers will be subjected to the six advertisements the National Football League this year allowed during broadcasts. But layer on regional and local ads and the barrage is on.

“I can tell you there’s a whole lot more than six,” Clark said. “I’m getting Virginia, I’m getting DC creep over the line. I’m getting it all.”

And anecdotally, some viewers are getting tired of it. With the monotony and the outcome of the 2015 DraftKings v. FanDuel daily fantasy ad war still fresh in the minds of industry stakeholders, an entire panel on the topic was held at the Global Gaming Expo in October.

It’s a situation made worse, said panelist and FOX Bet CEO Kip Levin, because professional sports leagues and gambling companies are “trying to use television to build a category from scratch.”

Still, industry experts contend, it’s just not as oppressive as it seems.

“I don’t see it as being too much just yet,” Nevada Gaming Control Board member Phil Katsaros said at G2E, “but definitely more noticeable.”

The general public continued to disagree when the expected deluge occurred with the advent of legal mobile sports betting in New York in January. It’s more noticeable, interestingly, than the insurance commercials that continue to dominate the ad buys during sporting events, according to information available at iSpot.tv. Even though no sportsbook has been among the top 10 spenders this NFL season, the general public seems to have become desensitized to emus, Jake and Flo, while becoming annoyed with Roman rulers and various jock pitchmen.

A possible future fix, Levin said, could be an expansion of multi-streaming – such as the slate of gambling-centric auxiliary feeds available on various cable platforms – where sports betting content is targeted to an audience inherently more receptive.

The current state of play even proved oppressive for Becky Harris, a former Chairwoman of Nevada Gaming Control Board. Luckily, the inundation she experienced in Nevada preceding the NFL season had abated, she said.

“All I can do is speak from my own personal experience. And I can tell you that since the repeal of PASPA, when I would attend Golden Knights games, I saw a significant increase in advertising for sports wagering, but not so much that I felt that it was too much,” she said at G2E. “A few months ago though, probably in anticipation of the current NFL and NHL seasons, what limited, tiny amounts of television I would watch, it was just one sports wagering ad after another to where I would just roll my eyes, because I didn’t want to see that content anymore.

“And maybe there’s some AI in the television algorithm, or I just don’t watch the television shows, but they’re done. I haven’t seen a sports wagering advertisement for probably three weeks, maybe a month and I don’t miss them.”

Although Nevada could be in for a wave of new TV ads when DraftKings and FanDuel are approved for Nevada gaming licenses, it’s currently an entirely different landscape than Virginia, Maryland or New York.

Newer markets as untapped resources fuel a customer-acquisition frenzy. Florida, which debuted as a live sports betting state in November, has been largely spared because the Seminole Tribe of Florida’s Hard Rock brand holds a monopoly. Once other states are seen as mined out, operators are likely to relent, experts believe.

Said Levin: “Everybody’s trying to get the early adopters because your early customers tend to be the better customers.”

The means sportsbooks are willing to use to attract them, such as sizeable free bets and deposit-matching, has added another concern: protecting vulnerable populations such as problem gamblers and the under-aged. That has only made the din seem louder to some.

“I think some of the bonusing is raising some questions in terms of the levels of what that looks like, and there’s different reasons for that, right? A lot of it is a customer-acquisition play, and a lot of it is it’s still a pretty nascent market,” Clark said. “You don’t see that level of bonusing in Nevada. You don’t see the level of advertising in Nevada that you might in newer markets where consumers are still picking where they might feel comfortable doing it. ….

“Anybody that’s involved in this ecosystem has got a role to play in ensuring that this is done right. And when leagues are setting guidelines on how many ads you can buy, and when broadcasters are selling local spots in addition to the national restrictions that the leagues are setting, there’s only so much that the gaming industry can do to restrict. And so I think that it is an issue that we need to work on. I think it’s an issue we have to work on together. I think that there’s real appetite from all everybody involved to do it.”

And a desire to self-regulate before public backlash spurs legislation.

According to iSpot.tv, DraftKings and FanDuel bought 63,122 television ads for their daily fantasy product heading into the 2015 National Football League season, a 177% increase from the previous year, before the pastime mushroomed nationally. Viewers felt “inundated,” and they despised the ads. 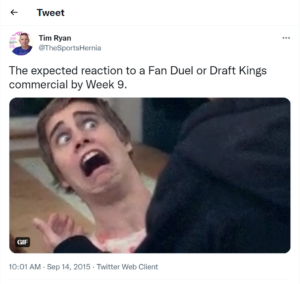 According to Nielsen, online sportsbooks combined to spend $154 million on TV advertising in the first quarter of 2021, with local stations a massive beneficiary. Recent push-back against pervasive marketing in mature European markets has prompted serious government action.

Gambling advertisements had been immersive in England before a 2019 mandate banning them during matches begun before 9 p.m. AGA Vice President, Strategic Communications & Responsibility at G2E Cait DeBaun cited a poll that claimed two-thirds of UK residents favor a total ban on gambling advertisements, following the lead of Spain and Italy.

“I think the public backlash is really driving change,” she said. “We have the benefit of learning from these other markets and what’s happening in UK, Spain and other countries. And I think now’s the time that we take those lessons and apply them before it’s too late.”

A frustration for regulators, Harris countered, is that governmental reaction in Europe has been justified with anecdotal evidence instead of research data.
Katsaros said the complete saturation of many types of gambling in Europe contributed to the recent rebuke. He doesn’t believe the American market is analogous.

Experts: US sportsbooks have a chance to self-regulate, moderate, placate before it’s too late

Even if insiders agree with Kastanos that the industry is “on target” in regards to the amount of advertising being pumped into living rooms and bars, this is a moment for legal sports betting in the United States.

“This is a moment,” Clark said. “And I think it’s the moment we have been warning about for a long time, in terms of, we have to learn from the more mature sports betting markets, and we have to work to learn those lessons to make sure that we get it right. That’s why we’ve never been for rapid legalization. It’s been about figuring out what works in each market, creating the right regulatory structure, creating the right marketplace to allow legal gaming to compete effectively with the offshore.”

“Advertising saturation is certainly an issue we hear from everybody.”

Harris said at least the gambling industry is “cognizant of the fact that there’s a tendency for over-saturation.”

“We had our own experience with that with fantasy football a couple of years ago,” Harris said. “And I think that stakeholders in the advertising space need to be thoughtful about what happened with the sports advertising and make sure that we’re taking care in our sports wagering and advertising to make sure that we’re not over-fatiguing because the pendulum seems to swing back and forth. And we don’t want to go so far afield that we’re going to find ourselves where the UK is in 10, 20 years.”