Mark Paul arguably picked the very best and very worst moment to publish a book about the Kentucky Derby.

The book being about more than just the race makes a difference. “The Greatest Gambling Story Ever Told,” a rollicking yarn about his and his cohorts’ prescient yet risky futures bets on eventual 1988 Kentucky Derby winner Winning Colors arrived during the global sports shutdown caused by COVID-19. So maybe readers were thirsting for a sports story from when there were actually sports.

Then again, the impact of the book arriving in the months before the 146th Kentucky Derby was mooted by the traditional Triple Crown opener being moved from the first Saturday in May to Sept. 5.

But it’s the story, Paul asserts, that makes this tale relevant 32 years later.

Winning Colors becoming just the third filly to win the Derby, ’80s nostalgia, high-stakes bets and some intrigue at the Mexican border make this a tale, Paul told PlayUSA, that has already drawn interest for potential development for television — and attracted readers.

The book reached No. 1 on Amazon’s sports gambling and horse racing lists and is a best-seller in sports history and sports biographies.

Inside ‘The Greatest Gambling Story Ever Told’

It wasn’t a book that Paul, a first-time author, had yearned to write, but the timing felt right for him given the distance from some of the more sordid characters and taxation issues. And being semiretired afforded him more time to write. In many ways, it’s a love letter to horse racing and horse betting, which Paul became infatuated with when sneaking into Santa Anita Park as a teen.

“I started off being fascinated with horse racing, probably from about the time I walked into the track at age 14,” he told PlayUSA. “It was just the most beautiful place.

“I kind of fell in with a fairly educated group of semiprofessional-type gamblers.” 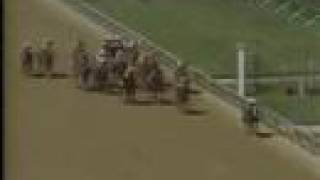 Paul, who admits in the forward that the dialogue in the book has been paraphrased and spiced up to fit the narrative, weaves the reader through instructional but not pedantic passages filling in the background of the horse racing industry. That goes from the auction house with Winning Colors trainer D. Wayne Lukas and owner Gene Klein to the stables and the backstretch.

Paul seems cognizant of the fact that the title is sure to entice horseplayers and gamblers, but attempts to reach a broader audience. In the process, he finds a middle ground by not belaboring what would be basic principles to the veteran gambler, while keeping those attracted to the narrative up to speed and able to follow along.

Perhaps it’s Paul’s description of picking out the perfect Miami Vice suit for a trip to Tijuana or his indulging in other tidbits from his youth, but the tale takes on a standard-def neon vibe that would go well with a score by Phil Collins.

Winning Colors’ rise from a prodigy of Lukas’ West Coast stable to her mainstream breakthrough as a gender-power symbol is chronicled from her auction to her run through the Kentucky Derby, with the excitement of Paul and betting buddies a constant accompaniment.

The story wanders through the betting parlors and dimly lit inner sanctums of the Agua Caliente track in Tijuana, where the bettors laid down a 50-1 future book wager to win a quarter million on the filly, then returned to watch the race and collect their winnings on Derby Day. They hoped. Interspersed with the rise of Winning Colors is the introduction of the antagonist, Jorge Rhon, the track owner they presumed would be displeased to pay out their winnings, with his backwater Tijuana track becoming ever less relevant in the age of simulcasting. Paul chronicles Rhon’s supposed ties to organized crime in the book as a means of amping up the suspense.

The latter half of the book, which is an afternoon’s endeavor at just 168 pages, winds through their adventure attempting to collect their prize, constituting a tale that Paul says has garnered interest from multiple television producers. The book was optioned for television or a possible movie deal, he claims, within five weeks of being written and a year before publication.

“It does probably help that I live in Beverly Hills and my neighbors are in the business,” Paul laughed. “I wrote the book—took me nine months—and I submitted it to a guy who is a big Hollywood guy, [a Creative Artists Agency] agent.

“He said, ‘Well, if you’re writing a book for gamblers, you did a great job.’ He said, ‘But you missed the whole story. The story is about a female winning a world championship. In what sport can a female compete head to head with a male? You’re not going to have a female quarterback beat Tom Brady in the Super Bowl … But my god, you can have a female racehorse go out and win the world’s greatest race. Now you’ll have a story people will want to read everywhere.’”

And, Paul hopes, any time.