Philadelphia is known for its rambunctious and outspoken fans — Eagles supporters will be the first to tell you that they’re passionate.

If you happen to find yourself in Philly on a Sunday and you need to find a great sports bar to catch the game, grab a bite, and throw back some beers, we strongly recommend watching with locals — you’ll soon see what we mean.

While there are literally hundreds of places in Philadelphia to watch the big game, we’ve chosen our six favorite NFL sports bars that offer game-day experiences and all of the football that you won’t want to miss. Whether you’re a Philly-born, die-hard Eagles fan or just visiting the City of Brotherly Love for the weekend, there’s no better place to watch on a Sunday than in one of Philly’s best sports bars. 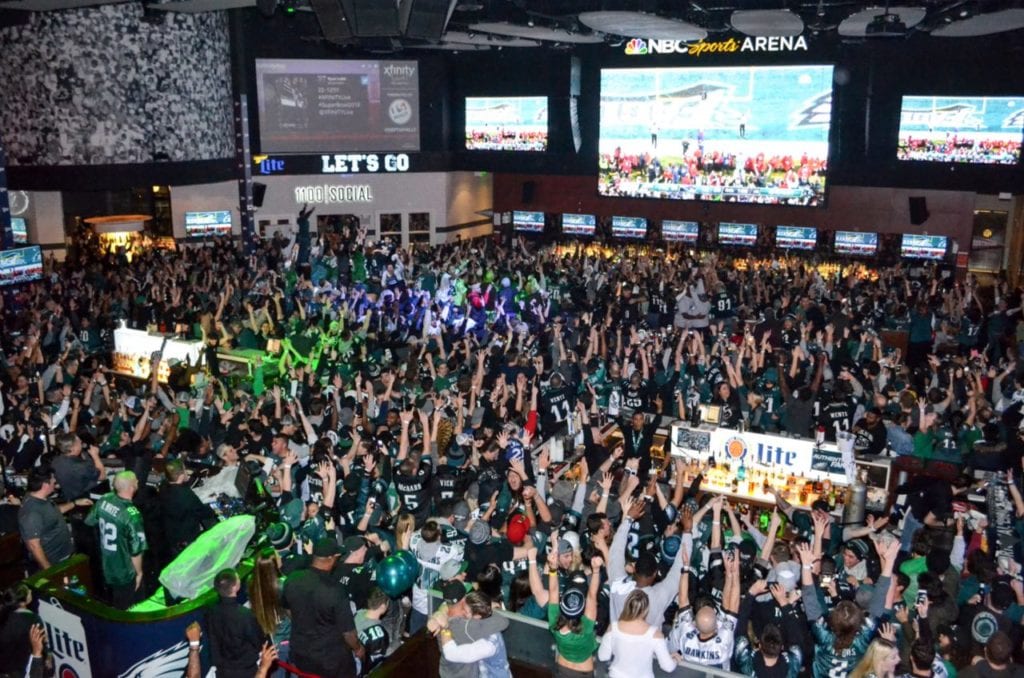 If you’ve lived in Philly or the surrounding area long enough, you may remember the original sports arena, the Spectrum: home of the Flyers and 76ers in the heart of South Philly. It’s long gone now, along with Veterans Stadium, where the Eagles and Phillies used to play.

In its place is a huge sports complex, home to Wells Fargo Center, Citizens Bank Park and Lincoln Financial Field, and plenty of places to watch a screen. If you don’t have tickets to the game, Xfinity Live! is the next best thing. With five sports bars serving everything from wings and burgers to chili and Mexican fare, there’s something to suit every fan’s taste.

And it’s not just the food that draws you in; it’s the whole Xfinity experience. With over 90 TV screens playing NFL Sunday Ticket, including a 32-foot HDTV at the NBC Sports Arena, craft and classic beers on draft, a Western-themed banquet bar complete with a mechanical bull, and a patio bar with live music and a fire pit — all yours to visit in one glorious afternoon.

Cavanaugh’s Rittenhouse (or Cav’s for short) is the perfect intimate dive bar. With 12 beers on draft, 48 bottles and cans, and over 20 HD TVs (all with NFL Sunday Ticket), you can catch your game — even if the Eagles aren’t playing — from anywhere in the bar. Menu items include only the classics: baked macaroni and cheese, wings, and nachos will keep you going between quarters.

You can book groups in advance to enjoy open bar packages, but even if you’re a drop-in, there are drink deals available for you on Sundays during the game.

The only sports bar in Chinatown, Bar-Ly offers 60 beers on draft and serves cocktails like Corona margaritas and beer mojitos. If you’re feeling adventurous, try a Sake Bomb or Snake Bite. Hungry? Whether you’re in the mood for tacos, wings, or pork buns, Bar-Ly has something for everyone.

The vibe is relaxed and electric: whether you’re seated at the bar or a four-top, the view is good, and Bar-Ly raffles often include tickets to a game. If you’re wanting to watch the Super Bowl here, make your reservations early to avoid being turned away at the door.

Take advantage of the unique atmosphere of Chinatown by watching the Eagles on one of Bar-Ly’s 37 screens while eating pad thai and drinking sake.

Established in 1860, the year that Lincoln first took office, McGillin’s is the oldest tavern in the city. And it’s never stopped operating, surviving both the Civil War and Prohibition. Being old hasn’t prevented McGillin’s from keeping up with the times — watch the playoffs and the Super Bowl on their HD and projector-screen TVs, sound on.

A true landmark in the Midtown Village neighborhood, McGillin’s history is rich and its bar is stacked: the establishment has 30 beers on tap and serves a wide selection of regional microbrews. In 2010, to celebrate their 150th anniversary, they launched their own McGillin’s 1860 IPA.

Not sure which pint to choose? Try the beer sampler with six local draft brews to get a taste of the region’s best labels. Or, purchase their Eagles Super Mug and get $2 refills of Bud Light during every Eagles game. McGillin’s doesn’t scrimp on the sports food staples: order pizza, wings, nachos, and potato skins and, of course, the original Philly cheesesteak — a classic they’ve been serving since 1930.

A neighborhood establishment since 1989, Locust Rendezvous has outlasted many others in Center City, and has come out the other side as, in their own words, a “great bar with good food — nothing more, nothing less.”

The Vous, as it’s affectionately known, has 10 flat-screen TVs, nine craft beers on draft, and a variety of specials ensure you can get drinks and nourishment at reasonable prices. It’s not fancy, but you’ll have a hard time finding nicer people anywhere else — and the fans include the Locust’s general manager, who you might still find tending bar now and then.

While passionate local sports fans also hold strong opinions on which Philly bars make their definitive best-of list, there will likely be one common denominator.

Chickie’s and Pete’s is a Philadelphia institution: for the true experience, the South Philly and original Robbins Avenue watering holes are the places to be on game day. The chain was named 2018 Best Sports Bar in Philadelphia magazine’s Best of Philly, and is the official caterer of the Touchdown Club at Lincoln Financial Field thanks to a five-year partnership with the Eagles.

To quench your thirst, Chickie’s serves sports-fan-favorites Budweiser, Bud Light, Coors Light, Miller Light and local Yuengling in personal pitchers. No cheap eats here but, if you’re in the mood, you can get a pound of crab legs, mussels, or their famous Crabfries — complete with not one, but two sides of cheese sauce.

These bars make up our top six, but the good news is: it’s hard to go wrong in a Philadelphia bar on game day. They’re rich in history, have plenty of screens for catching every bit of the action, and they guarantee you’ll be mingling with some of the greatest — and loudest — sports fans in the country.

For the best NFL bars in New Jersey, visit PlayNJ.