Louisiana’s history was forged – or at least made more colorful – by scallywags and gamblers on Mississippi River paddle wheelers and in New Orleans card rooms.

It appears the state has an affinity for mobile sports betting, too. Just a few weeks after New York became the belle of the American sports betting ball with a smashing mobile wagering debut, Louisiana did even better in a key statistic released by GeoComply.

According to the company, which provides geolocation services in states with mobile gambling, the total number of unique players in the first 36 hours after the mobile and online launch on Jan. 28 was equal to 3.6% of Louisiana’s population. 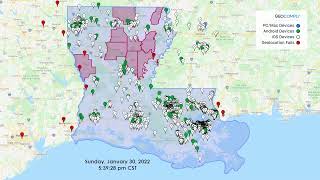 That the highest transaction volume occurred between the AFC and NFC championship games isn’t surprising, even with the New Orleans Saints missing the playoffs entirely.

Because there were no major sporting events – such as the numerous bowl games contested in the Caesars Superdome – being held last weekend in the state, the traffic can be viewed as mostly homegrown and provides a baseline for local interest.

That will make for a fascinating contrast when Super Bowls and College Football Playoffs games roll back into town with thousands of out-of-state fans. New Orleans will host Super Bowl LIX in 2025.