The Seminole Tribe of Florida’s “motion to stay” and ordered shutdown of sports betting in the state was rejected on Wednesday by the same judge that ruled its 30-year gambling compact there invalid.

Federal District Court Judge Dabney L. Friedrich had ruled late last Monday night that the Seminoles’ deal violated the Indian Gaming Regulatory Act and nullified it entirely. The Department of the Interior, not the Seminole Tribe of Florida was the defendant in the case. The Tribe also filed a notice of appeal. In the stay request, it declared: “Federal Defendants state that they take no position on the Tribe’s Motion.”

The appeal is to be heard this week by a three-judge appellate panel.

West Flagler Associates and Bonita-Fort Myers  Associates, pari-mutuels operators, have been ordered to file any new responses by Nov. 30. The Seminole Tribe would have a day to offer a retort.

The initial ruling from the District of Columbia circuit was an emphatic rebuke of a deal brokered by Gov. Ron DeSantis. The Seminoles discreetly launched online mobile sports betting on Nov. 1.

Despite requesting and being denied a stay, the Seminoles through their Hard Rock Digital sports betting app were still accepting wagers and soliciting deposits in Florida as of Nov. 29.

While sports betting in Florida somehow continues, Hard Rock sports betting advertising was banned there by Google on Nov. 24, per an update to the company’s ‘gambling and games‘ policy. Why did a judge invalidate Seminole sports betting compact?

Friedrich ultimately agreed with plaintiffs West Flagler Associates that the so-called “hub-and-spoke” model the Seminoles used to offer state-wide sports betting did not conform to federal law despite tacit approval in August by the Department of the Interior’s Bureau of Indian Affairs. Under this unprecedented system, the Seminoles have offered mobile wagering to bettors anywhere in the state using servers located on Tribal lands at their Hollywood, Fla., property.

Precedent has established that bets are placed where the bettor is located, not where the server that handles them is situated. Compacts negotiated with tribes allow for wagering activities to be conducted only on tribal lands. Tribes in other states have gained the right to offer gambling outside their property by negotiating beyond the compact, or if the state legalized sports betting through political means. Sports betting became legal in Florida only by the auspices of the compact and a successful 2019 constitutional amendment limits the expansion of gambling without voter approval.

Wrote Friedrich: “Although the Compact ‘deem[s]’ all sports betting to occur at the location of the Tribe’s ‘sports book[s]’ and supporting servers … this Court cannot accept that fiction. … When a federal statute authorizes an activity only at specific locations, parties may not evade that limitation by ‘deeming’ their activity to occur where it, as a factual matter, does not.”

The Seminole Tribe was not a plaintiff in the case. West Flagler Associates, which owns two South Florida pari-mutuel facilities, and Monterra MF sued Secretary of the Interior Deb Haaland, whose assistant secretary, Bryan Newland, quasi-signed off on the compact. The vacated compact would have seen the Seminoles pay $500 million yearly to Florida for the monopoly on sports betting and the addition of craps and roulette at its six state casinos.

Hard Rock-branded craps and roulette tables were stationed on the casino floor at Seminole Hard Rock & Casino Tampa on Wednesday but were not in use.

“We are reviewing the court’s perplexing ruling, which certainly contains appealable issues,” Christina Pushaw, a spokesperson for DeSantis, was quoted in a Politico post. “Because neither the Seminole Tribe nor the state of Florida are parties to the case, it is unclear what if any immediate impact the ruling has in Florida. We look forward to working with the tribe to ensure the future success of the compact.”

The tribe loses those rights and the ability to offer retail sports betting with Friedrich completely voiding the new deal. Instead, gaming in the state reverts, according to the judge, to the previous compact, which took effect in 2010. Under that deal, the Seminoles agreed to pay $350 million annually, but halted payments when the state refused to stop card rooms from offering banked card games the courts rules were their province, exclusively.

According to the ruling:

In the Court’s understanding, the practical effect of this remedy is to reinstate the Tribe’s
prior gaming compact, which took effect in 2010, see Indian Gaming, 75 Fed. Reg. 38,833 (July
6, 2010), and which may remain in effect until 2030, see Compl. Ex. D. (Prior Compact)
§ XVI(B), Dkt. 1-4 (West Flagler). See Fl. Stat. § 285.710(3)(b). In that respect, this decision
restores the legal status of class III gaming in Florida to where it was on August 4, 2021—one
day before the Secretary approved the new compact by inaction. Because the more recent
Compact is no longer in effect, continuing to offer online sports betting would violate federal
law. See 25 U.S.C. § 2710(d)(1)(C) (providing that “[c]lass III gaming activities shall be lawful
on Indian lands only if . . . [they are] conducted in conformance with a Tribal-State compact . . .
that is in effect”).

The Seminoles case for seeking a stay

According to the motion to stay, the Seminole Tribe claims it will suffer “irreparable harm” without it and cites a potential “substantial blow to the Tribe’s Sovereign and Economic Interests.” They deem any harm to the plaintiffs as “speculative at best.” The finances of the Seminoles and their global Hard Rock International brand are not often public record, but the company offered some morsels in the filing.

Among the financial outlays cited in court documents:

What to watch for now 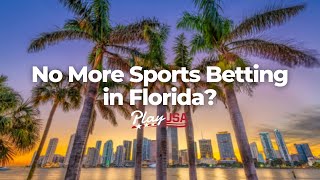