Inspired by the classic Chinese legend of the Monkey King, the Celestial King slot machine provides a delightfully cute game with a whole lot to love.

Scientific Games and Bally draw players into a fantasy world that is filled with dancing cartoons, jackpots and bonus rounds. While the range of bonus systems may seem confusing at first, the mixture of lovely artwork and an exciting range of ways to win should keep players coming back.

The art design featured in Celestial King is really remarkable. Each graphical choice is beautiful and functional.

Golden towers and a purple moonlit sky draw you into the fantasy world, but the background for the reels stays a simple, bold red that matches the color scheme and lets the symbols stand out against it.

The symbols themselves are great. While the card symbols A, K, Q and J aren’t too exciting, each of the higher tier spaces gets a unique 3D-style portrait or design. The designs for the priestess, pig, medal, coin, lotus, bonus dragon and Celestial King wild space all have a stylish cartoon look while appearing to rise off of the board.

There are also a number of animations in place. Winning paylines trigger the symbols to move, shine and dance. Watching the little Celestial King unroll the “wild” scroll makes the win a little sweeter. This also makes winning paylines very easy to spot.

On top of all that, while you play the larger Celestial King above the reels will do little dances and flourishes with his staff to congratulate players on their winnings.

The music is a fairly standard soundtrack inspired by older Chinese music, which provides a nice environment even if it’s nothing special compared to the art.

Getting past all of the amazing graphical flairs, the core slots gameplay is fairly simple. The machine features five reels and three rows in standard mode. There are 30 paylines, although players don’t have an option to reduce the number in play.

Each spin requires a minimum bet of 50 cents to cover the lines and extra scatter plays. The paylines are fairly generous. The symbols just need to appear in each reel from left-to-right to trigger a win. 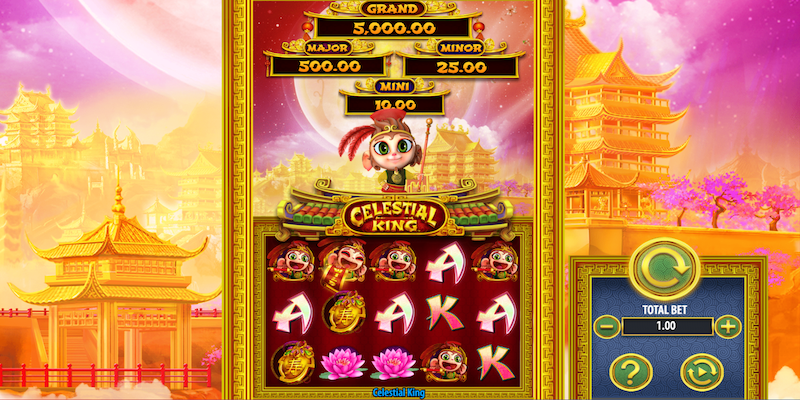 Wild spaces are available in all the reels to help fill out paylines. Three matches of the general symbols or two wild spaces are the minimum to trigger a payout.

Also, note that there is the option to put a traditional jackpot into play. If the player bets at least $4 on a spin, that spin becomes eligible for the grand jackpot. This adds the option for special jackpot wild spaces to form on the reels. They act like normal wild spaces for filling paylines, but getting five jackpot wilds in a payline will trigger the grand jackpot.

How to win the Celestial King slot free spins bonus

Players not interested in trying for the grand jackpot, aren’t out of luck though. The slot game Celestial King features two exciting bonus game systems that are available at all bet levels.

The first is a simple, free spin bonus round. While playing the game, dragon bonus symbols may appear on the reels. Getting at least three at a time anywhere on the board will trigger the free spin round.

In this round, players begin with eight free spins, but bonus spaces can still appear on the board to stack on extra wins. Getting at least another three on a free spin will add another eight spins to the round.

Aside from any winnings from the free spins, players will also receive a flat bonus based on how many bonus spaces triggered the game. Three, four or five dragons respectively reward the players with 5x, 10x or 15x the total bet.

These spaces, which look like pots with credit values on them, can appear on the board during any normal spin. They can have values between 1x and 50x the total bet on that spin. Getting three or more triggers the special Celestial King Respin game.

When the game is triggered, the entire board starts to morph into a new staircase-style layout. The scatter spaces that triggered the game stay locked in place as the second, third, fourth and fifth reels grow to be four, five, six and seven rows tall.

The player starts this respin round with three spins. Each spin rolls a separate reel for each free space on the board. The goal is to get new scatter bonuses to pop up.

These new scatter bonuses will also be 1x to 50x multipliers of the original total bet. If a scatter bonus space shows up, it’s locked into place and the spin count resets. The game only ends when every space is full, or the player goes for three spins without any new scatter spaces showing up.

At the end of the game, each of the scatter bonuses showing on the board are counted and paid. If the player manages to fill up the third, fourth, or fifth reel during the game, then they’re awarded the matching mini, minor or major jackpot.

Filling the entire bonus board results in a 50x multiplier bonus. Note that the mini, minor and major jackpots do not multiply with the total bet until the bet is over $4.

The strengths of the Celestial King slot machine game should be fairly apparent. It’s a great game top-to-bottom with something for every player.

The graphics are cute and charming without being distracting. Players with bigger limits can shoot for the grand jackpot, but the bonus games are still available for low-limit players.

The 96% RTP means that this isn’t even a guilty pleasure. With lots of small wins to keep a bankroll alive and plenty of varied opportunities for bigger wins, this machine is definitely worth players’ time.