Konami takes players on a little trip through Chinese mythology in the Dragon’s Law Twin Fever slot machine. The dual dragons are ready to fill the board with wild spaces and let the coins flow freely.

Konami’s Action Stacked Symbols and a generous pay table will leave players with lots of wins as they wait for the fates to align. With just a little luck, a set of yin-yang symbols will unlock the free spin bonus round. Let’s see what riches lie in the dragons’ hoard.

Naturally, Dragon’s Law slots use a Chinese-inspired art design. An old red temple provides the backdrop with two golden dragon statues watching over the reels. While the game does fill out the lower value pieces with standard card symbols of “A, K, Q, J, 10 and 9,” the higher value symbols are more in line with the theme.

There are flowers, a stack of coins, an ornate turtle, a golden pig and a large heart sign, all done in a highly detailed 3D-style. The wild and yin-yang symbols are a little plain but still work well. Unfortunately, there’s not too much music to add to the experience.

The bonus free spin round plays some Chinese instrumental music, but other than that the sound design is just a standard mixture of bells and clicks. The music to announce a big win is actually a traditional classical orchestra, which doesn’t help the immersion.

Dragon’s Law Twin Fever is a three-row game with five reels. The game uses 30 paylines, and players must play all 30 on every spin. The bonus features come with a required 15 credit bet.

The game does feature wild spaces, which can appear on the second, third, fourth and fifth reels during the normal game. All matches have to run left-to-right along a payline. The card symbols require at least a set of three, but the picture symbols only need two. As is fairly common in Konami’s games, this slot machine uses their Action Stacked Symbols system. Before a spin, the reels have some stacks overwritten with one picked symbol that can be anything but the bonus or the wild.

This doesn’t guarantee a win, but it does occasionally put a lot of the same symbol across the board to set up big combinations.

The main gimmick is the Dragon’s Law feature. During normal gameplay, any spin has a chance of throwing Chinese lantern symbols out to signal the arrival of at least one dragon.

The dragon will appear from the side of the screen carrying a number of wilds on its back. After twisting and curling around the reels, it will drop the wild symbols and change the spaces for that spin.

It’s possible that lucky players will see a second dragon appear to fill even more spaces. Note that while wild symbols will never appear naturally on the first reel, dragons are able to drop them there to potentially start off some great wins. Dragons will also not overwrite a bonus space. 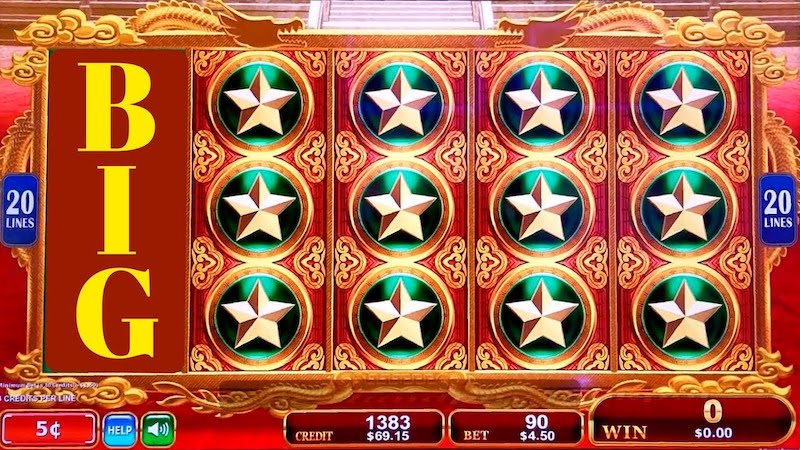 If a wild symbol tries to change a bonus symbol they simply combine.

The core gameplay has a very even pacing to it. Normally a lack of wilds in the first reel would be a negative, but picture symbols paying out for just a pair means that a wild in the second reel is almost as good as one in the first.

These sets of two obviously don’t pay out much, but it means that a lot of otherwise losing spins kick five or 10 cents back to the player.

It helps avoid the boredom of a real losing streak and extends the session well. Players shouldn’t find it too hard to wait for a good Dragon’s Law or even some free spins.

The Main Bonus Round

While playing Twin Fever slots, yin-yang symbols can appear in any of the five reels. If at least three show up anywhere, it triggers a scatter win and rewards the player with some bonus spins. Players can receive 8, 12 or 20 free spins respectively for getting three, four or five yin-yang symbols.

The scatter payout for five bonus symbols is also the highest payout in the game at 1,500x the line bet. The free spin game itself is fairly simple. There are no multipliers or major changes.

The only difference from the main gameplay is that Dragon’s Law is more likely to trigger, although it is not guaranteed. The yin-yang symbols are still on the reels during the free spins, so the bonus round can trigger again.

Dragon’s Law Twin Fever is a fine slot machine overall. Players who enjoy the setting, or even just players who like dragons, should find the game fun.

It would be great if the game did more with the theme. As it stands, there’s just some pretty artwork and a dragon animation.

The frequent wins in the core game are refreshing though, and the Dragon’s Law feature is a fun way to load up the reels. The 96% RTP also keeps it competitive with similar machines. It’s a fine choice for an extended session.