Video slots that feature the Megaways engine have become one of the hottest things in the online gambling world. Australian casino software developer Big Time Gaming invented the Megaways mechanic, which is now part of a plethora of classic titles, including Bonanza, 88 Fortunes and Twin Spin.

This guide will cover what Megaways games are all about in comparison to traditional reel slots. We’ll also go over the top seven Megaways titles and their key information.

What are Megaways slots?

Megaways games are video slots that utilize Big Time Gaming’s Megaways engine. The main characteristic of this engine is that it modifies the reels so that they have a chance of showing a different number of symbols on every spin.

For comparison, traditional reel slots always have a fixed number of rows for each reel, though some special features that can extend them. With Megaways slots, each reel can be different after every spin. For instance, reel one can have two symbols, reel two can have six, etc.

This also changes the way online casinos pay out wins. If you’re playing traditional reel slots, you’ll want to connect a certain number of identical symbols on one of the active paylines. On the other hand, Megaways slots have no paylines in the traditional sense, so you win if identical symbols appear on consecutive reels regardless of their position, usually starting from the leftmost reel.

In certain Megaways games, the winning symbols disappear from the layout while existing symbols fall into their place and new symbols land from above. This creates an opportunity for multiple wins during a single play.

Megaways titles can also have an extra four-row horizontal reel above or below the main reels. In this case, each symbol will correspond to the vertical reel adjacent to it. When the symbols in this horizontal reel become a part of a win, they disappear, with the other ones from the right pushing them out.

Every reel in most Megaways slots has the potential of containing seven symbols, resulting in 117,649 ways to win. However, the number of ways to win in Megaways slots varies these days, as Big Time Gaming has started licensing its engine to other software developers. Now, the maximum number of symbols can be lower or higher than seven symbols per reel, so the number of ways to win can range between 15,625 and 248,832. Some games even have bonus features that extend this number to 1 million.

Megaways slots can be really fun, as they offer a huge variety in terms of winning outcomes. However, they are generally worse for your bankroll and usually have fewer bonus games. This is why we still prefer the original 88 Fortunes or Divine Fortune to their Megaways remakes. Here are the main strengths traditional slot games have over Megaways online slots:

7 of the most popular Megaways slots

There are plenty of games that feature BTG’s Megaways engine, and we expect this number to continue growing. Out of all current Megaways titles, we’ve chosen seven that seem to be player favorites. Here’s our list of popular Megaways slots and their details. NetEnt introduced Divine Fortune Megaways at the beginning of 2020, three years after the release of the original. It is a Greek mythology-themed game with nice graphics and smooth gameplay.

The game has several bonus features, including wild respins (each wild that appears results in a respin and moves one step down until it disappears), wild on wild (after a wild symbol appears in the position of a falling wild, it results in wilds covering the entire reel), free spins game (in which you will get between 10 and 20 free spins), and free spins bonus wins (collecting five identical bonus symbols during the free spins game leads to a multiplier of between 10x and 500x). 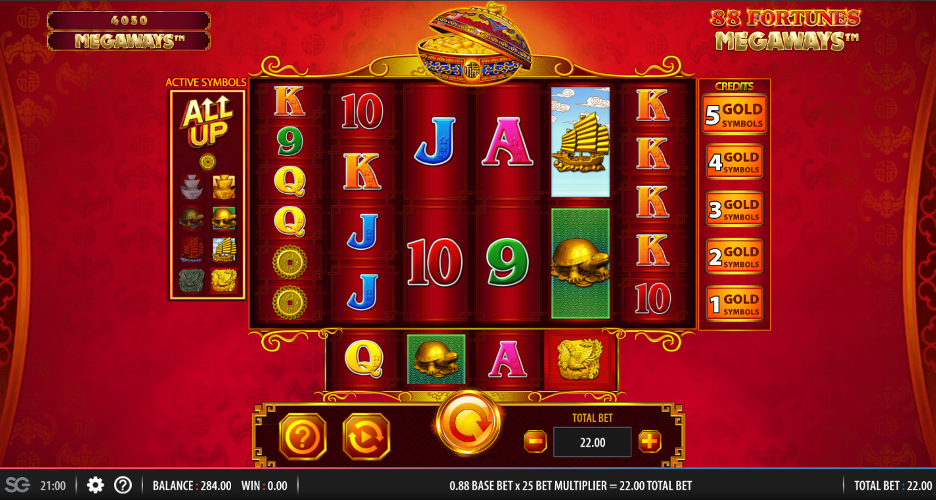 88 Fortunes Megaways is a Chinese-themed title centered around golden items from ancient China. The game features a free spins round where every winning spin results in a +1x multiplier. The picker feature can be triggered randomly during the base game after one or more fu bat symbols land on the reels. This feature presents the player with 15 coins, and once three of them match, you can receive the reward in the form of free spins or multipliers. Twin Spin is a 2013 title from NetEnt. Many players like it because it reminds them of old Vegas slot machines. It got its Megaways remake in 2020. The reason it’s called Twin Spin is because every spin results in two adjacent reels showing identical symbols. There’s also a free spins round that is triggered once five or more scatters appear after a single play. During the free spins round, wild symbols can award multipliers up to 3x. Spartacus is a popular WMS title that got its Megaways update in 2020. You play it across six reels plus a four-row horizontal reel, with each having the potential to display up to 10 symbols. Every reel might contain a curtain that hides certain symbols. These will reveal and become active after a win. The free spins bonus game applies when four or more amphitheater symbols appear during the base game. It awards between six and 16 free spins and activates the expanding wild feature. Wheel of Fortune Megaways is a game show-themed video slot played across six reels. This slot features a bonus round that can provide up to 18 free spins, with a chance to earn additional free spins. While the bonus round is active, every scatter that appears extends an entire reel it is on by one symbol, up to a maximum of 10 symbols per reel, leaving a potential for 1 million ways to win (the base game has 117,649 ways to win). Also, every wild that appears during the base game has the potential to extend across an entire reel. Monopoly Megaways represents BTG’s twist on the beloved Monopoly board game. The slot has six reels, and landing on Chance gives you the opportunity to play with a maximum of 117,649 lines. Every time Mr. Monopoly lands on one of the properties after your third consecutive win, the game will place a house place on that property. Once there are at least five houses on a single property, you will receive eight free spins with a chance to get more. Each owned utility adds a multiplier to the free spin wins. Bonanza is one of the most beloved video slot games of all time, and its Megaways remake has only helped increase its already enormous popularity. The game is played on six reels and features 117,649 ways to win. The free spin bonus round triggers once any four G, O, L and D letters land after a single play. Players initially receive 12 free spins with a chance at even more during the round itself. Every reaction during the free spins game increases the multiplier count, which can rise indefinitely.