Skip to content
Rate This Game
(4.1/5)
Submit
When submitting my score I agree that my IP will be stored to prevent abuse
Win Cash Prizes Playing Online Slots
1

The Quick Hit slot machine series by Bally and Scientific Games is proof that an online slot doesn’t need to be complicated to be engaging. Capitalizing on a simple game design with which most slot players are already familiar, the Quick Hit slot game brings a classic feel to modern slot gaming.

Each game in the series features a five-reel layout with a number of paylines based on how many spots for symbols exist in each reel. Most commonly, there are three symbols on each reel, creating a game with the standard 30-payline structure.

Adding to the classic feel are many of the symbols that the Quick Hit casino games frequently use:

Wilds, which can count as any standard symbol and as their own unique symbol with their own paytables, are another characteristic of each game. The most consistently present symbol in the Quick Hit slot machine is its namesake — the “Quick Hit.” This symbol is responsible for most of the bigger possible payouts, including the jackpot.

It also doesn’t need to appear in any pattern or on any particular paylines. Simply having more of them appear anywhere will allow the player to climb the Quick Hit paytable ladder. The top of that ladder, typically requiring at least nine such symbols to appear across the five reels, is where a lucky player might find a jackpot.

With these commonalities in place, each Quick Hit game has a foundation upon which to build.

Quick Hit Platinum slots have three spots on each of its five reels (5×3). There are 30 possible paylines and all of the classic symbols. Hitting the jackpot with the Quick Hit symbol requires nine of them to appear and pays 2000x whatever the chosen cost of spinning was. 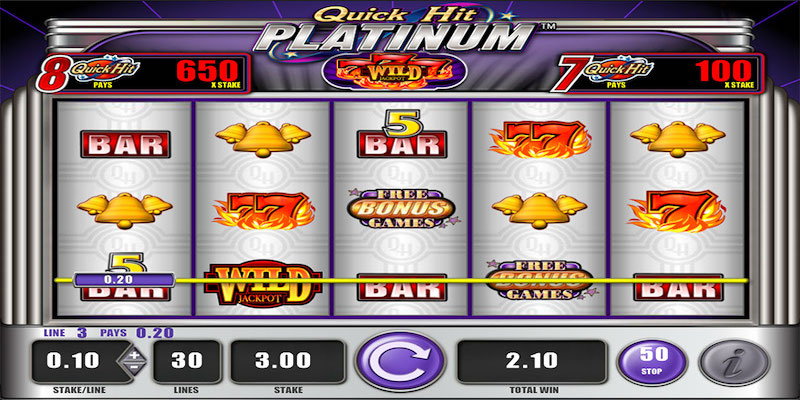 The Quick Hit Platinum symbol, obviously unique to this game, offers one of the biggest possible jackpots among any in the Quick Hit series. Getting all five of these symbols to appear across the five reels awards an astounding 5000x payout of the stake.

Quick Hit Black Gold slot swaps in and out a couple of classic symbols (a “$” and a third Bar symbol in for the 77 and 777 symbols) but keeps the number of total standard symbols the same as Quick Hit Platinum. It also changes the jackpot paytables slightly. This game offers up to 2500x the stake when nine “Quick Hit” symbols appear.

Quick Hit Pro slot is the one exception to the 5×3-reel structure shared by the other games. Each spin shows four spots on each reel (5×4), giving this game 40 possible paylines. The total number of standard reel symbols in Quick Hit Pro is two more than in the other Quick Hit games. This is to compensate for the fact that 20 symbols appear on each spin rather than 15. 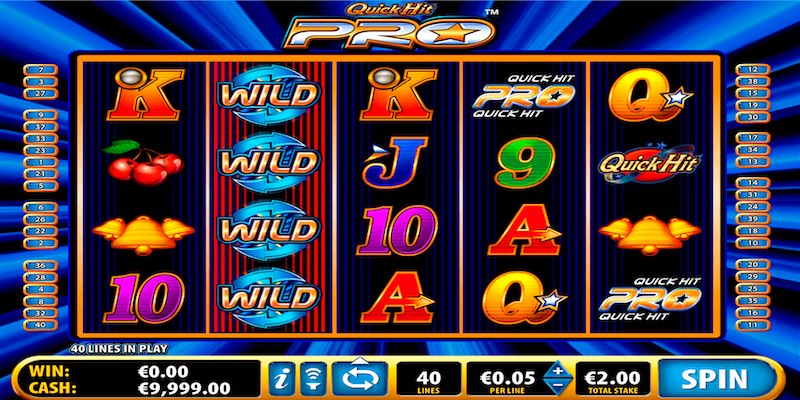 The Quick Hit jackpot paytables are also different. In this game, 11 Quick Hit symbols need to appear in order to hit a 1500x jackpot. 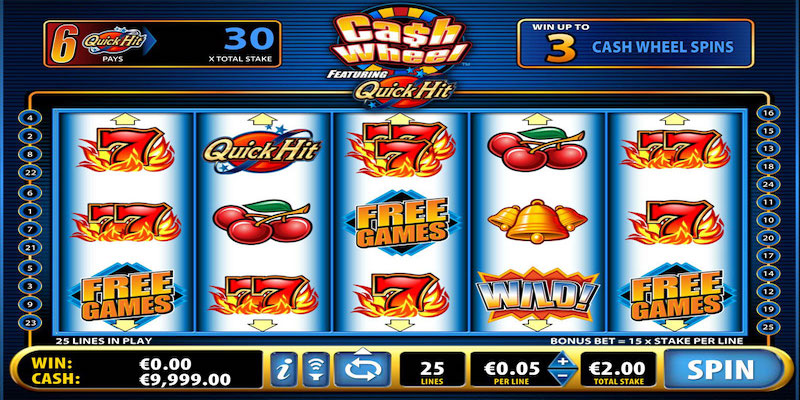 It’s true each installment of the series doesn’t necessarily offer an entirely different experience in the main game. But the element that sets the Quick Hit series apart from other slot machine brands — its detailed and engaging bonus games — is the same thing that truly differentiates each game within the series from the rest.

In addition to all the standard symbols, Quick Hits and wilds, each Quick Hit game has a symbol that triggers a unique bonus game. This symbol only appears on the second, third, and fourth reels and must appear on all three to trigger the start of the bonus game.

When the bonus game begins, a grid of 20 tiles with question marks appears. Each tile randomly contains a specified number of free games that players can earn:

The player will continue to choose tiles until they have chosen three of the same tile. If the player chooses three “11 free games” tiles before three tiles of any other amount, for example, the bonus game will begin with 11 free spins.

With this bonus game, an 18-tile grid of question marks appears. Instead of choosing how many free spins are earned (it’s always 10), the selected tiles will determine which of the possible four different games will be played. Quick Hit FEVER, Locking Wilds, 2x Pays, and 3x Pays are the possibilities. 2x Pays and 3x Pays simply provide a 2x or 3x multiplier for the 10 bonus game spins.

Locking Wilds causes any wild symbols that appear to be locked in for the remainder of the bonus game spins. A few wilds locked in on the board can really make it easy to hit some valuable winning combinations.

Quick Hit FEVER, like the name suggests, gives an opportunity for a truly special Quick Hit jackpot. In addition to an added amount of Quick Hit symbols on the reels, there’s an expanded paytable. Beyond the 2500x pay for nine “Quick Hit” symbols, there’s 5000x for 10 and 7500x for 11.

Perhaps the most uncommon feature in the entire Quick Hit series is Pro’s bonus game. The game starts with 15 free spins and tallies all winning combinations as normal.

In PROCHINKO (an obvious portmanteau of Pro and Pachinko) each ball is fired, one by one, into a Pachinko-like game where they end up in a slot indicating a multiplier, up to 5x. All multipliers earned are added together to create a final multiplier, up to 100x, that is applied to all winnings acquired during the 15 free bonus game spins.

A large wheel determines the winnings in this bonus game. It will be spun with a specified multiplier some number of times. First, a player selects from 21 tiles until they select three matching tiles. These tiles determine the number of spins of the large wheel, up to three. The tiles also determine the multiplier, either 1x or 2x.

Due to the jackpot-style nature and heavy reliance on bonus game winnings, Quick Hit games can have an uncomfortably high level of volatility for some players.

Still, the series is a great choice for slot enthusiasts. A variety of classic-style games with the modern touch of innovative bonus games is a combination that could keep any slot player busy for hours.