Rate This Game
(4.5/5)
Submit
When submitting my score I agree that my IP will be stored to prevent abuse
Win Cash Prizes Playing Online Slots
1

There’s a reason that the Bally brand stands out in casino gaming. Their addition of cash bonus wheels to a number of their slot machines adds the thrill of big game show wins to typical slot fun. The Triple Cash Wheel slot machine is no exception, although in this case it’s mixing the thrill of spinning the wheel with slots that are more suited to power players. Just like it says on the label, this is a machine for people looking to play three spins at once.

The game’s aesthetic seems to match this design choice. The artwork is fairly clean, crisp and not much else. The symbols are fairly standard cherries, bells, bars and flaming sevens. The only outlier is the special “Quick Hit” scatter space, which has a nice textured look to it. The reels are white, so the symbols do stand out well. To make it even easier, the symbols pulse to show a winning payline.

The music and sound design seem mainly in line with a simple slot machine. A soft repeating score builds a little tension while the reels spin, but there’s no other background music. Short alarm bells and chimes mark winning paylines. The bonus round does feature a shift into more of a game show environment with a jazz-style track to make the player feel like they’ve just been called up on stage.

The slots machine Triple Cash Wheel can look a little intimidating because it is quite a tall and busy board. What’s important to note is that the total screen displays three completely separate games. Each game has five reels and three rows, with 20 paylines. There’s no option to play fewer games or paylines, with the minimum bet starting at $1, with 60 cents for the paylines and 40 cents for the feature plays. Players may want to review the winning paylines before playing, since there are some left-to-right combinations that do not pay out.

The main symbols don’t have particularly high payouts, with the highest being the rare five wild spaces combination, which only offers 25x the total bet. Since there are a total of 60 possible paylines, the wins are fairly frequent. Even if they tend to stay on the smaller side they can stack up into real wins, and it’s fairly rare for players to have much of a true dry spell with so many possibilities in motion. 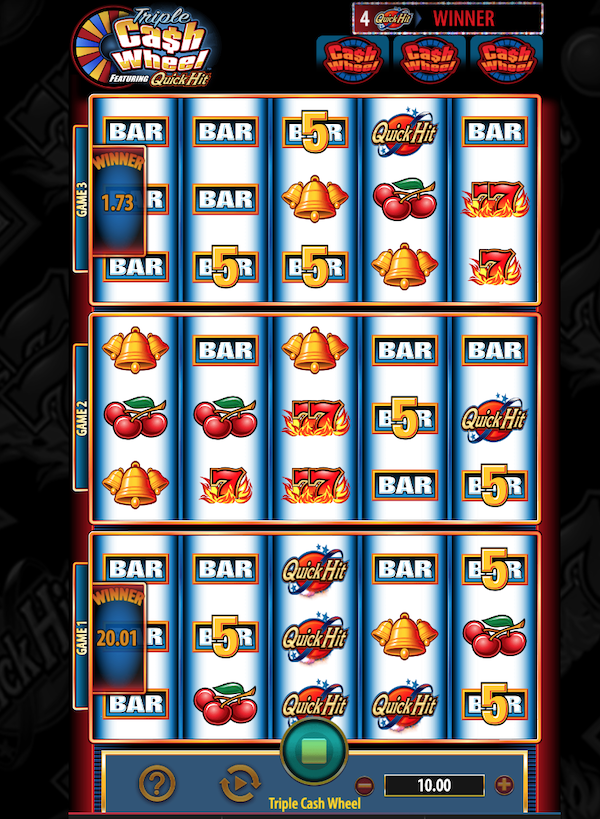 In general, the core gameplay is focused around getting the Quick Hit scatter win or the bonus cash wheel. The Quick Hit space is a scatter prize and only needs to show up at least three times in the same game to trigger a win. Additionally, those three spaces pay break even money, but the payout rises to jackpot levels with a 1500x payout for nine appearing within the same game.

Obviously, a big part of the free online slot Triple Cash is the bonus wheel. Getting to the bonus wheel in this game is a little more complicated than some of Bally’s other offerings. Above the top set of reels, there are three signs for the cash wheel. During regular play, when a game’s reels finish spinning there’s a chance that it will turn on its matching light. If all three light up, then the bonus round starts.

The bonus round has three potential stages to it. The first stage is a Match 3 board, that gives Triple Cash slot players a chance to triple their cash and their wheel spins. Players pick boxes on the 3 x 7 grid, revealing spaces that can reward one spin at 1x value, one spin at 3x value, three spins at 1x value or three spins at 3x value. The first set of three that are revealed determines the spin count and multiplier for the wheel.

The wheel itself is fairly simple. There are a number of credit values that pay out as a multiple of whatever the per line bet is. A $1 total bet has a 1 cent bet per line, and so on for other multiples. Removing two zeroes off the credits shows what the actual multiple will be. The big prize is the 150,000 credit spot, which can grow to a 4,500x prize if the 3x wheel multiplier is in effect. Once the player goes through their spins, the rewards are multiplied and paid.

There is a single free games space on the wheel. If the player lands on that, they’re granted ten free spins and 1x their total bet. Note that the wheel multiplier does not change the number of free spins, it’s always ten. The free spins play out on the same layout of reels, with 60 paylines in play and a special 3x multiplier on any wins. It’s a very thrilling bonus stage, even if there are no guarantees to win big. It is not possible to re-trigger the bonus wheel during the free spins.

Even though Triple Cash Wheel slots are exciting games, it may not be right for all players. There’s a lot going on in every spin, and the bonus games are fairly involved. Normally the slow drain on the buy-in and a 95.21% RTP would make this a great game for long sessions, but some players may find the busy screens a little tiring after a while. These slot games are perfect for anyone who really wants to see a lot of reels going all at once. With 15 reels on each pull, a higher minimum bet, 3 shots at the jackpot and a bonus game to hope for, it’s perfect for experienced power players looking for excitement.