Skip to content
Rate This Game
(4.1/5)
Submit
When submitting my score I agree that my IP will be stored to prevent abuse
Win Cash Prizes Playing Online Slots
1

For many comic lovers, Wonder Woman holds the crown as one of the most beloved representations of female power and strength in the DC multiverse.

Making her debut in 1941, Wonder Woman’s character was created by noted psychologist, Dr. William Moulton Marston, to bring to life his vision of the ideal feminist.

Wonder Woman’s extreme athleticism and superior tactical skills are paired with her quest for honesty, peace and love, giving the Amazonian princess a unique balance between traditional masculinity and femininity and making her a somewhat controversial figure for the time.

This may be the driving force behind Wonder Woman’s enduring popularity as, even today, the character maintains a dedicated fan base, often displaying their loyalty with branded merchandise that showcases her signature red, white and blue costume, and the lasso of truth.

With consistent consumer support of the franchise and recent Hollywood reboots of the superhero’s story, nostalgia has prompted popular slot game developer, Bally, to bring the Wonder Woman slot machine to the casino floor.

With all the variations of Wonder Woman throughout the years, traditionalist fans will be pleased to see graphics that are based off the 1974 television series.

Symbols on this five-reel Wonder Woman online slot include iconic images, such as the invisible jet, head and armbands, knee-high red boots with the lasso of truth. There are classic shots of Lynda Carter as Wonder Woman or Diana Prince, and Lyle Waggoner as Colonel Steve Trevor. 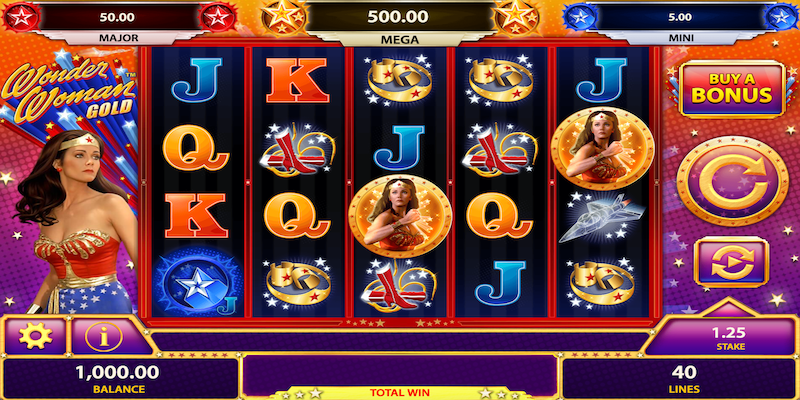 Game music is taken from the show as well, with regular gameplay set to the show’s standard background score and bonuses that trigger the full theme song with vocals.

When playing the free Wonder Woman slot machine, one of the first things players will note are the stacked reel symbols. All symbols, except scatter, wild and bonus symbols, can be stacked and include the five Wonder Woman symbols along with traditional card symbols, J through A.

This feature can lead to some exciting wins as any of the nine stacked symbols line up across the reels to cover several of the paylines.

The game is set on five reels with four spaces on each. Wild symbols are possible on reels two, three and four, and will expand to fill the reel when part of a winning combination.

Star symbols in blue, red and gold show up on the first and fifth reel and can trigger a progressive win.

The game also includes three golden Wonder Woman Scatter symbols, found on reels one, three and five, that trigger the bonus when they all appear together.

Although regular gameplay will be a hit with true Wonder Woman fans, triggering the bonus round definitely pumps up the excitement level.

After receiving a payout for the Scatter symbols, players can choose up to 25 free spins with all purple Diana’s. A number of card symbols change to special gold Diana’s. The number of free games you choose determines how many card symbols are replaced. 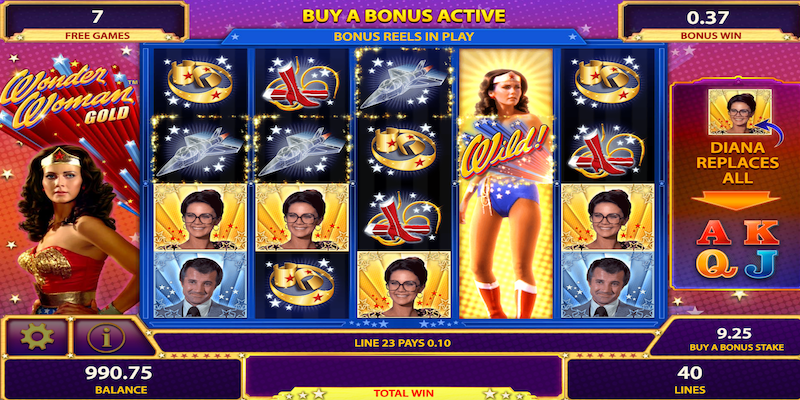 Choosing eight games will replace all card symbols with gold Diana’s. Sixteen games will change symbols J through K and selecting 25 games will change only the J and Q symbols. Scatter symbols are not available during the bonus so no additional games may be won.

If the bonuses aren’t hitting naturally, the game also offers the option to buy a bonus. Players can choose their stake, paying between 9.25 and 462.50, and can make their free game selection.

The inclusion of progressive opportunities also adds value to the Wonder Woman slot machine. The blue, red and gold progressive star symbols are only found on reels one and five.  To win the progressive jackpot requires landing a matching set.

Progressive star symbols are only available within the base game and cannot be triggered during the bonus. Higher bets increase the chance of winning a progressive award, creating some incentive to raise bet levels.

Wonder Woman’s recent Hollywood reboot gives this game a popularity boost, but it’s hard to predict whether that attention is sustainable.

Younger fans who prefer the updated Wonder Woman character may create a demand for something more contemporary.

For now, lifetime fans of the Wonder Woman franchise can take a journey into their favorite superhero’s past. Take advantage of the winning potential that comes with a lucrative bonus game and progressive jackpots.