However, in recent years, lawmakers approved a state lottery. There are two horse racing tracks in the state, Sweetwater Downs and Wyoming Downs. Pari-mutuel wagering on the races are legal at these tracks. People can also bet on racing simulcasts at the tracks and off-track betting parlors around the state. Plus, charity bingo and raffles are legal. Additionally, a handful of tribal casinos with slot machines, tables games, and live poker have been up and running since the tribes fought for the right to run casinos in 2005.

The tribal casinos are the 789 Smokeshop & Casino, Little Wind Casino, Shoshone Rose Casino & Hotel, as well as and the first and still largest, the Wind River Hotel & Casino.

Getting approval for tribal gaming in Wyoming was no easy feat. The Northern Arapaho Tribe, which owns and operates the Wind River Hotel & Casino, took the state to federal court to fight for its right to operate a casino under the Indian Gaming Regulatory Act of 1988.

The tribe claimed that since Wyoming had allowed charitable gaming for fundraising purposes, it should be allowed to operate a casino on tribal land in accordance with the act. In 2005, the court agreed. The Northern Arapaho Tribe set about turning its small bingo parlor into the state’s largest casino and gaming operation. There are now 800 gaming machines on the property, featuring some of the most popular slots on the market.

Recently, the North Arapaho tribe argued it did not need state approval to offer sports betting at its casinos. In a statement, the tribe said it conducts gaming under authorization from the US Department of the Interior. No timeline has been released, but it appears sports betting in Wyoming will be coming to the tribe’s three casinos in the near future. However, it is highly unlikely that mobile wagering will be offered.

Since it fought the opening of Wind River, the state was left out in the cold when it came to revenue sharing. However, by the time the Eastern Shoshone Tribe started making plans to open the competing Shoshone Rose Casino & Hotel, Wyoming lawmakers got wise. They negotiated a revenue-sharing deal with the tribe. The Shoshone Rose Casino & Hotel is currently open and operating with as many as 400 gaming machines on site.

Since there’s no real money involved, people living in Wyoming or visiting the state are free to play on social casino sites all they want.

Social casino games are a multi-billion dollar market. The most popular include app-based games for Android and iOS operating systems. People can download these to a mobile device or Facebook-based apps. These include casino-style games developed by industry leaders such as Zynga, Activision Blizzard, Korean Nexon, and Supercell. Social gaming revenues reached more than $1.5 in the United States in 2016. However, Asia remains the largest market with $2.2 billion in revenue in 2015 and more than 500 million users reported.

Players may be able to access any number of offshore online casinos from inside Wyoming’s borders. However, playing on them may fall into a legal gray area. This is due to the fact that gambling is strictly against the law outside of legalized operations and tribal casinos. So playing slots on these sites would have to be considered against the law as well.

When it comes to gaming, Wyoming is not the most progressive state. It only recently jumped on board with certain ideas other states have employed for decades. The state lottery only became legal in 2013. Tribal casinos came just a few years before that, but not without a lengthy fight.

In 2016, state lawmakers were said to be reviewing all facets of the gaming industry. They are considering establishing a state gaming commission. It would regulate all gambling and consider new operations, online and off. However, no gaming bills were created or commissions established coming out of those discussions. The issue of internet gaming is not on any current agenda for Wyoming lawmakers.

The Wind River Hotel and Casino 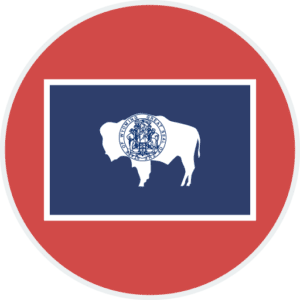 The Wind River Hotel and Casino is widely considered Wyoming’s premier gaming establishment. It has more than 800 slot machines, 10 live table games, and a live poker room. This is, by far, the largest gaming facility in the state.

Located just south of Riverton, the operation began more than 20 years ago as a small bingo hall operated by the Northern Arapaho Tribe. It has grown into Fremont County’s largest employer with 700 people now working there. There is a 90-room hotel on the property, plus two full service restaurants, cafe, and an espresso bar.

The casino runs a number of promotions all year round, a free-to-join rewards program, regular no-limit poker tournaments, and a Bad Beat Jackpot inside the poker room.

Table games available include real money blackjack and roulette. The more-than 800 gaming machines on the property include video slots, reel slots, video poker, and slots with progressive jackpots ranging from penny slots to $25 machines. This includes some of the most popular slot games on the market today. All the machines use a ticket-in ticket-out system with cashiers, change kiosks and ATM machines available 24 hours a day.