Rate This Game
(3.6/5)
Submit
When submitting my score I agree that my IP will be stored to prevent abuse
Win Cash Prizes Playing Online Slots
1

The original Mata Hari, officially known as Margaretha Geertruida MacLeod (nee Zelle) was a Dutch dancer and courtesan. Having once studied to be a kindergarten teacher, the German spy and femme fatale worked as a circus horse writer, artist’s model and an exotic dancer.

Mata Hari was a well-known seductress and would use this to her advantage by seducing influential men for intelligence. She was ultimately exposed to the French as a German spy, was tried for espionage and executed by a firing squad.  It’s said that  she blew a kiss to the firing squad after refusing to be tied to the stake.

The Mata Hari slot machine features five reels, four rows, and 40 paylines. Players can bet a minimum of $.50 up to a maximum of $1,000 per spin.

Other valuable symbols in the game are three intriguing male figures—who clearly have some sort of designs on the seductive lady.

Regular wild symbols are easy to spot with the word “wild” clearly shown. The wild symbols will substitute all other symbols to complete winning combinations, except for the “Free Spins” symbol.

The Mata Hari slot machine is equipped with all of the standard functions including an auto-spin button. When clicked, you’ll be provided with the option of 10, 20, 50, 100 or 200 spins. You can quit the auto-spin feature at anytime by pressing the stop button.

This is a medium volatility slot with a reported RTP of 95.79%.

During her heyday, Mata Hari gained fame as an exotic dancer in the glittering city of Paris. Her act was inspired by the artistic rage of her day for Orientalism.

On stage, the seductress dressed in sexy garb inspired by the harem girls of the Far East. The soundtrack features exotic sounds that reflect Mata Hari’s stage performances. 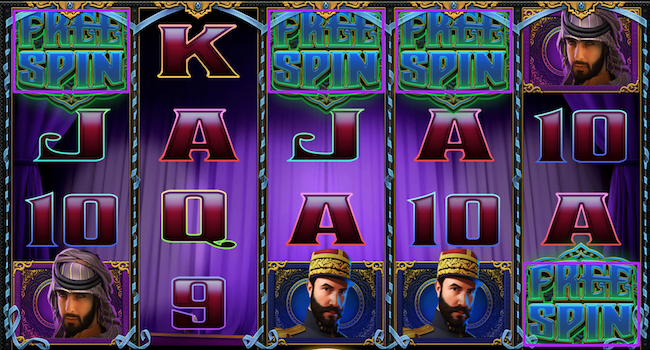 Everi is making a name for itself based on its brightly colored games. This one is no exception.

Mata Hari’s depicted beauty aside,  the most enticing feature of this slot game are the free spins. Indeed, these spins brim with lucrative potential.

To trigger the the free spins bonus round, you will need to collect 3, 4 or 5 free spin symbols across anyone of the five reels. The bonus round includes a nudge feature. If the Mata Hari slot symbol appears on any one of the five reels, the symbol turns into a wild and will fill the entire reel to complete winning combinations. Three or more Mata Hari symbols can equate to fairly substantial wins.

Everi has infused the notion of the femme fatale into this game’s design through creative artwork and subtle animations.

The Mata Hari slot combines elements of traditional slot games with a few of the modern touches that Everi has become known for.

The game lacks the complex bonus rounds available from other software houses. The free spins feature is the main attraction to the game but is quite difficult to hit.  If you do manage to win those free spins, the potential for a substantial win increases significantly.