Skip to content
Rate This Game
(4.2/5)
Submit
When submitting my score I agree that my IP will be stored to prevent abuse
Win Cash Prizes Playing Online Slots
1

Take a trip down to the great state of Texas and try to strike it rich with the Texas Tea slots machine. This cartoon-style slot machine by IGT provides the thrill of trying to strike it big, with a whole lot of southern charm.

The flashy animations, scenes, and fast gameplay are sure to make players want to stick around for a spell. The chance for a big jackpot and two big variable bonuses don’t hurt either.

Texas Tea slots are an interesting mixture of old cartoon-style graphics and newer animations. The free-to-play slot machine background is a very simple blue sky with two oil derricks lining the reels, and the symbols are simply placed onto a white background. Each of the symbols is a nicely drawn Texas-themed piece though.

The reels feature a bull, an armadillo, Texas Ted’s car and airplane, the logo, three Texas flowers, and a cactus.

The car flashes its lights and honks on wins, and the armadillo sticks out its tongue and shouts. Most impressive is that both bonuses feature fully animated transitions and payouts, with characters dancing, oil derricks pumping and checks floating through the air.

The soundtrack is fairly catchy frontier-style music, although it’s a little more cattle drive than prospector.

There’s a pretty big focus on the themed sound effects that trigger on wins or when certain spaces come up on the board. Players will hear a lot of honking, whip cracking and bulls snorting.

After a little time, the sound can be overwhelming, but it does a good job of building excitement as the reels settle.

The Texas Tea slot machine features three rows and five reels, but only nine possible paylines. Players can choose to play one, three, five or all nine.

The paylines are fairly easy to keep track of since it’s just three horizontals and a few diagonal variations. Everything has to flow along the payline from left-to-right to win, except for the Texas Ted spaces. These are scatter-based and pay out as long as they’re anywhere on the board.

There is a straight jackpot available, with five matching Texas Tea symbols in a payline paying out 10,000x the line bet. 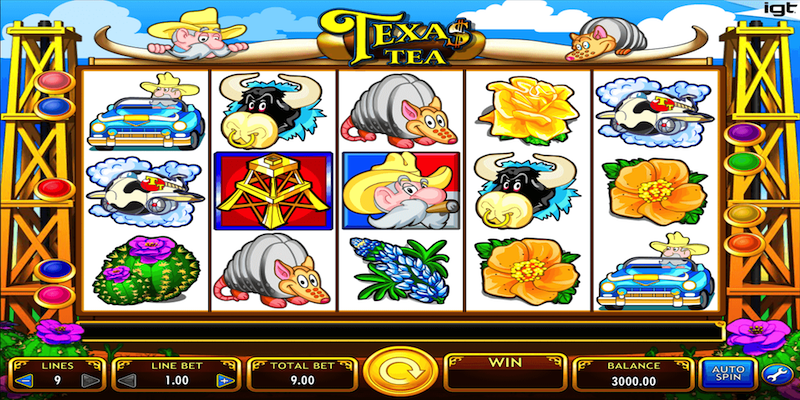 The core gameplay can be an interesting mix of volatile and steady. With only nine paylines there aren’t as many ways to win as some modern machines, and the game doesn’t feature any wilds to help bridge gaps.

Players betting on all nine lines will definitely see some major swings as a few misses can put a real strain on the buy-in. That said, the game somewhat alleviates this by offering some very generous payouts.

Even getting just one Texas Tea symbol in the left column pays 2x the line bet. This stops the game from being too harsh on the player’s bank while they’re looking for a bigger win to recover.

Getting three Texas Ted spaces anywhere on the board triggers the “Oil Dividend” bonus round. This isn’t an interactive game; the game just moves to Ted’s office for a quick animated scene.

After he cuts the player a check, it will appear on the screen and start counting up before settling on a total payout, which is based on a multiplier of the total bet for that spin. The other game is triggered by getting at least three oil derrick symbols in a winning payline, starting from left to right. This takes the player to a special “Big Oil” bonus round, which starts with a map of Texas.

Players are awarded oil pumps based on how many were in their winning payline. There are eight regions that players can choose for drilling, and players can only put one pump in each region.

Once the pumps are placed they’ll start working. Each pump adds to the multiplier, possibly through several rounds of successful pumping.

Once each well is dry, the multiplier is applied to the line bet, and the player goes back to the main game. Payouts for big oil depend on the number of drills available.

The minimum is a 5x multiplier. Three, four and five pumps have maximum multipliers of 100x, 200x and 495x.

Is it a Player’s Cup of Tea?

The Texas Tea online slot games are great for players looking for fun bonus games, big payouts and fast gameplay. The design is adorable, and the sounds create a great atmosphere for a shorter session.

The Big Oil bonus game is a fun, interactive twist on jackpots, and the other potential high payouts keep the game exciting. Problems only arise for any players looking for a very long and relaxing game.

While there are still loss breakers mixed in, the limited ways to win can leave smaller buy-ins quickly drained.

The charm of the animations and sound effects may also wear thin after the 100th armadillo cry. Still, it’s fun for a quick visit and a chance at that black gold.