The Wild Wolf slot machine, by IGT, features outstanding graphics in a Native American theme. Wild Wolf is also a celebration of nature’s undaunted majesty as it features its namesake creature: the wild wolf.

It’s no secret, IGT loves to create games that feature the mysterious wolf, an epic symbol of wild places. This one is a unique offering with its flexible betting range and generous bonuses.

Bet as little as a $.01 or increase your stake up to $1,000. Wild Wolf features a 94.87% return to player (RTP). Wild Wolf is a 50 payline online slot game that boasts a visually arresting interface and adrenaline-pumping action.

Wild Wolf is a sleekly stylish game with a timeless Native American motif that celebrates the wolf. It features enchanting wolf and Native American imagery. When playing, you’ll see dreamcatchers, close-ups of wolf faces, wooden totems and wolves howling at the moon. The piercing eyes of the wolf will accompany you as you spin your way to rewards. With its snow-covered backdrop, Wild Wolf, by IGT, promises an unforgettable gaming experience. The rest of the game’s symbols include playing cards from nine to ace.

IGT’s Wild Wolf has been a hit in the brick-and-mortar casinos in New Jersey and Nevada, so it’s no surprise why IGT chose to revamp it for mobile casino players.

The game’s wild symbol is represented by a howling wolf appearing before a full moon. You can spin as many as four wild symbols on a single reel and this turns it into a stacked wild.

With its high-energy features like the scatter symbol, Wild Wolf boasts a fun gaming experience complemented by a 94.97% RTP.

Wild Wolf boasts a dreamcatcher bonus feature. It can appear on any of the game’s five reels. This feature can trigger multipliers and a free spin bonus round. 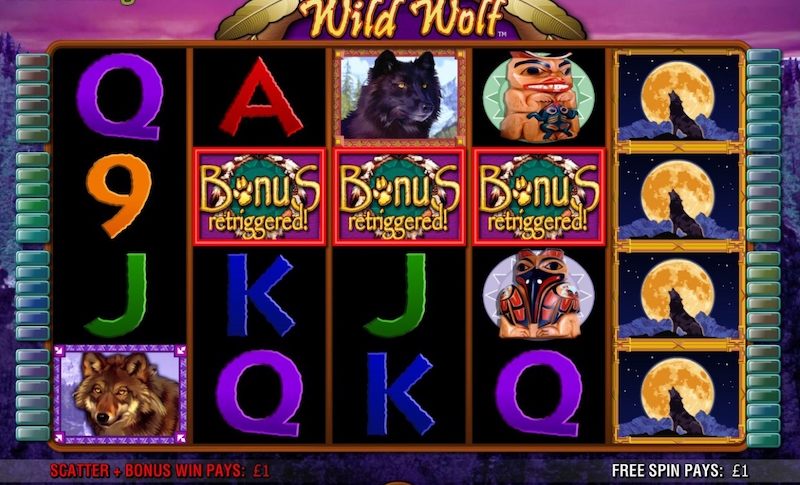 The retriggering feature can max out at 255 free spins, a terrific feature for ramping up those rewards. One of the great things about this bonus feature is that it tends to trigger more wilds — and that also means a greater chance for improved rewards.

Finally, Wild Wolf has an autoplay feature that will appeal to some gamers. Although, if it doesn’t appeal to you and you prefer to press for spins manually, you can turn off the feature.

Wild Wolf is a fine offering with a distinctive Native American theme that celebrates the majestic appeal of the wolf. The game does not boast a wealth of bells and whistles, but it is quite sophisticated in its simplicity.

Gorgeous scenery enhances the game in the looks department. If you are looking for an animal-based game with the potential for steady rewards, consider making a few spins on Wild Wolf.

This slot game lives up to IGT’s pantheon of animal-inspired games and its Native American overtones make it even more distinctive from the rest of the pack.