Fans of Monopoly should be thrilled to find a new way to take a crack at striking it big on Broadwalk or Park Place. SG Interactive provides a new Monopoly-inspired set of slots that mixes big winnings with very big reels. The colossal reels and huge bonus round should keep players hooked, although the realistic board game design helps too. Let’s see if we’re passing Go or going to jail in Epic Monopoly II.

Epic Monopoly II has a great visual design that should bring out everyone’s memories of the classic game. The background is a nice theater setting with green money-themed reels standing out well against the red curtains.

In general, everything just looks nice. All of the symbols are bright, shiny and easy-to-see. The slot machine doesn’t use any generic card symbols, and instead makes good use of Monopoly-themed spaces. Players can expect to see shiny versions of the classic game pieces, including the battleship, the car, the hat, the shoe, the moneybag and the wheelbarrow. There are also tall stacked portrait spaces for Uncle Pennybags, the Scottie dog and the Monopoly board itself. They get a little creative with the inclusion of a Miss Virginia Ave. and a Marvin Gardens character, but they at least fit the early 1900s theme.

Overall, the design is just generally well done. Each spin is accompanied by a nice, jaunty soundtrack that seems to be inspired by showtunes. There are also some fun game show sound effects and announcements during the bonus round. The game uses some slick transition animations for when stacks of wilds move to the colossal reels, and there’s an entire board game bonus round with animations for the moving pieces and several different surprisingly detailed sub-games. The very short railroad bonus pick features a beautiful trainyard that most players will only see for a few seconds. It’s an astonishing level of detail.

A Monopoly on Reels

Epic Monopoly II technically features 10 reels and 100 paylines. Players have to play all paylines for each spin. Note that the line bet is actually for 2 lines at a time. For example, the minimum penny bet is a 50 cent total bet. The game uses two entirely separate sets of reels. The left side is a conventional 4-row set of 5 reels, and the right side is a set of special “colossal reels” that span a whole 12 rows. Note that they are completely separate and paylines cannot cross from the normal reels to the colossal reels.

The main game includes wild symbols that can fill in for any space except the bonus symbol. These wilds are generally stacked wilds that can potentially fill up an entire reel. In Epic Monopoly II, note that there’s a special epic wilds feature. If a stack of wild symbols fills all 4 rows on a normal reel, then the corresponding reel on the colossal reels also changes to be completely wild for that spin. It doesn’t always pay out, but it can potentially put a lot of paylines into action. 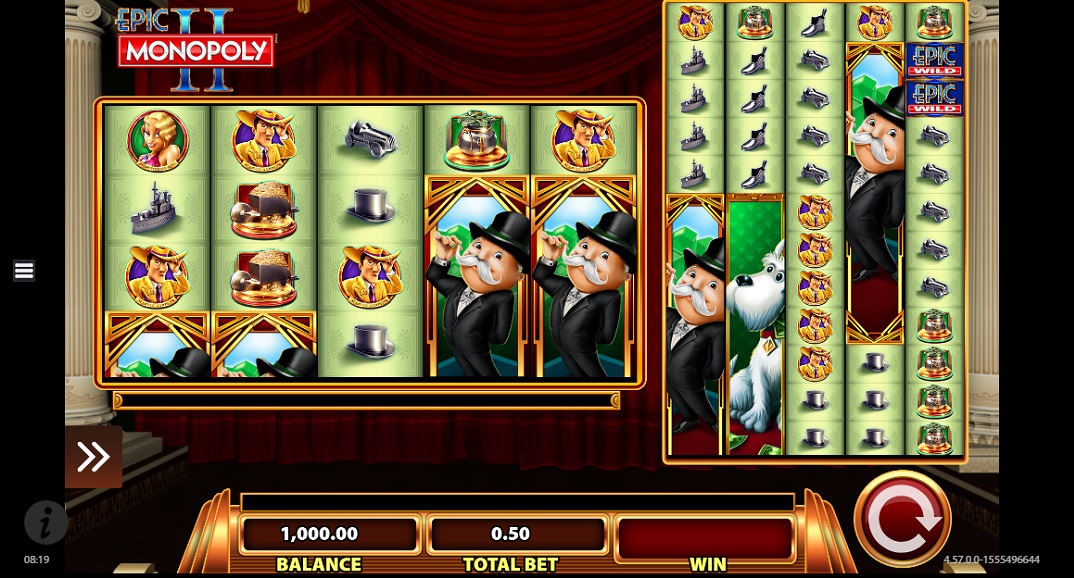 It’s also worth noting that symbols in the game tend to be stacked. Uncle Pennybags and the Scottie dog always come in as a stacked portrait, but many of the general symbols fall in as blocks too. On the bright side, this means that one well placed wild symbol can pay out a lot. Unfortunately, it also means that it’s pretty easy to fail to start anything on a spin since the stacks can block each other.

Playing the main game is generally fun even though it can occasionally be a little slow since so many reels have to settle and pay. The individual payouts aren’t much per line. Players need to get 4 of Uncle Pennybags or a full set of 5 game pieces to break even on one line, but this isn’t as bad as it sounds since most payouts have a lot of simultaneous wins. The bread and butter of the game is a bunch of small payouts triggering at once to string the game out while players wait for the bonus.

Players can trigger the bonus game by getting bonus symbols on at least 3 reels during the base game. The bonus symbol can appear on the first, third and fifth reels on the normal and the colossal sets. Getting more than 3 reels of bonus symbols doesn’t change the bonus round, it merely awards a bonus scatter jackpot. There’s no bonus payout for just getting 3 symbols. Getting 4, 5 or 6 pays out 10x, 50x and 100x the total bet respectively. The epic wheel is a fairly standard looking bonus wheel, but it features several different bonus game options that offer a lot of ways to win.

Players can simply get an immediate cash payout of 500x their 2-line bet if they land on the 500x space. There’s also a “spin again” space. This lets the player spin again, except it applies a 2x multiplier to wherever they land. This generally also counts for any payouts within a bonus game, if it triggers one. The “spin again” space can’t be triggered twice since it replaces itself with a 250x the 2-line bet space after it triggers.

There are several free spin spaces available that can grant 7, 10 and 20 free spins depending on which one is hit. The game mostly plays out the same during the free spins. The only difference is that hitting at least 3 bonus symbols won’t retrigger the wheel. Players who trigger the bonus are simply given extra free spins along with any bonus payout for getting more than 3. The number of extra free spins is determined by however many they originally received. Players who landed on the 10 free spins space will only receive an extra set of 10 no matter how many bonus symbols they get.

Players can also trigger the Chance game. This one lets players choose one of 5 cards that can have a range of potential prizes. Players can win an immediate cash prize worth between 200x and 500x their 2-line bet. They can also win 20 free spins or 10 dice rolls in the Around the Board game. There’s also a chance for a special “pick again” card to appear, which lets players choose another card but applies a 2x, 3x or 5x multiplier to the payout or potentially an entire bonus game.

Around the Board game

The big draw is the Around the Board game, which tries to bring the feel of the real board game into the slot machine. Players can get 2, 5 or 10 dice rolls in the game depending on where they land on the epic wheel. All players start on Go and use their simulated dice rolls to move. All of the different spaces in the game feature different mini-games and payouts.

All of the property spaces allow players to pick one of 5 available cards with between 25x and 300x the 2-line bet payouts on them. Players may also get a chance to pick a new card with a 2x to 5x multiplier in play. Water Works lets players pick between 3 faucets to get between a 25x and 200x 2-line bet payout, or possibly even a payout and an extra dice roll. The railroad spaces combine the two, with cash payouts between 40x and 300x available along with an extra dice roll or a chance to pick again with a multiplier. Spaces like the Electric Company, Income Tax, Jail (Just Visiting) and Free Parking simply award random payouts between the space-specific ranges. Free Parking always gives out an extra dice roll too.

Landing on a Community Chest space lets players choose between 3 cards. One has a 60x to 100x 2-line bet payout, one has a 20x to 40x 2-line bet payout and an extra dice roll and one gives out 120x to 200x the 2-line bet and pays out the other two cards too. The Chance space offers 3 cards that can have a mix of potential awards, including cash payouts, a free dice roll or even just an automatic move to Broadwalk, a railroad space or a utility space. Go To Jail is the only negative space. It moves the player straight to jail with no payout. Note that passing Go always awards the player between 200x and 800x their 2-line bet. The Around the Board game isn’t unlimited though. After the player passes Go 3 times the game stops awarding free dice rolls, except for the Free Parking space.

The Last Time Around The Board

Epic Monopoly II is a generally fun game that should please anyone who’s looking for a really entertaining session. It’s not a fast machine. The bonus rounds have a lot of steps and each spin takes a little longer than smaller machines just due to the sheer number of paylines. It’s a great machine for stretching out a session though, with a lot of ways to get small wins to stay in the game while holding out for the big bonus. The 96.01% RTP is also nice to see since occasionally games with extensive bonus rounds lower their returns. Anyone who’s looking for a fun, flashy, modern machine can enjoy Epic Monopoly II at DrafKings online, Caesars and other top online casinos.