Only players hardy enough to weather the fire and ice of Frozen Inferno should dare to try this entertaining free-to-play slot machine. SG Interactive blends the bonus round with two sets of main reels with very different styles.

The frozen reels slowly lock down more loaded wilds while the wily inferno reels send out roaming wilds that can swing the player’s luck around. The dual modes are a unique idea, but one that requires players to be ready to invest a lot of time and money to truly enjoy.

It’s definitely not a game for everyone.

Overall, it’s a nicely designed game with a clean and detailed look. It shouldn’t be a surprise that the game features a split aesthetic to match the title.

The game features two separate worlds to reflect the competing fire and ice magic at play. The ice game uses a lot of lovely soft blue colors along with a steady snowfall in the background, and the fire game features plenty of dark reds and lava effects. Each world has a matching soundtrack.

The inferno uses a heavy drumbeat and ominous tone, while the frozen world sticks to softer chimes to evoke a cold, twilight feeling. Both games amp up the tempo and excitement as wilds fill the reels and the player moves closer to the bonus round.

The only negative is that the game is dark, not just thematically but literally. The reel backgrounds are black, which doesn’t always do a good job of highlighting some of the darker symbols against the equally dark background.

Speaking of the symbols, the game does a generally nice job living up to both themes of dark magic. The game uses fire and ice versions of a set of symbols inspired by the game’s looming wizard.

There are scrolls, rings, amulets, runes, staves, cracked crystal balls, potions, skulls and a far off floating city. Each of the symbols are well designed with a shiny, metallic look.

The game’s wizard can appear as a large portrait that takes up 4 spaces. The wild spaces use nicely done fire and ice animations as they play their part on the reels. It’s a nice level of presentation that helps keep the two modes distinct.

The core gameplay of Frozen Inferno can be a little complicated, especially due to how it goes hand-in-hand with the bonus round. The game features 5 reels and 4 rows with 40 potential paylines in play.

Players have to pay for all 40 paylines on every spin. Note that once players start a game, they can’t change their bet unless they’re willing to reset the state of the game and probably lose a few wild spaces.

The only time to safely change the bet level is near the start of a session or after a bonus game concludes and the game switches modes. 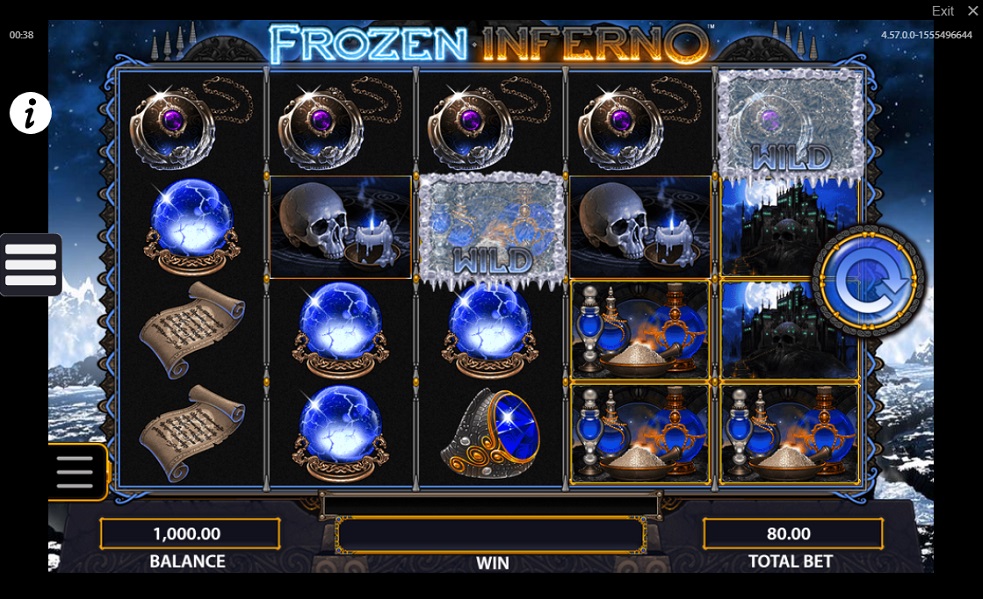 The modes are the biggest feature in the main game. When players first start Frozen Inferno, they should have a chance to choose which game mode they would like to play first.

In general, it’s fine to pick either one since players should probably keep playing until they get a chance to see both rounds. The only difference, other than appearance, is the behavior of the wild symbols.

The frozen mode features wilds that lock into place and the inferno mode uses roaming wilds that move to an adjacent space during each spin to create a more chaotic game.

During any spin in the main game, players can have an elemental bonus symbol appear anywhere on the reels. The frozen mode uses ice and the inferno mode uses fire. If it appears in a space that isn’t currently wild, then it creates a wild for the current game mode.

Frozen wild symbols just freeze immediately in place, but inferno wilds move next to the existing block of roaming wilds to make it grow. If 4 wild symbols are already activated in either mode, then getting an elemental bonus symbol just triggers the bonus round.

The core gameplay in Frozen Inferno is interesting since players need to be ready to see things through until at least the bonus round. The game gets more loaded with wild symbols over time. It’s possible to have unlucky frozen wilds or roaming wilds that end up in a bad corner, but it’s still generally a nice way to make it a little easier to win.

Players are going to depend on lots of cheap sets of 3 to add up and stretch out their bankroll because the highest single line payout is only 250x the line bet.

Nevertheless, the stacked wizard symbols can create some rich payouts for anyone lucky enough to get a few stacks next to one another. The natural flow of the game is going to revolve around holding out for long enough to make it to the end of the mode and enjoy the bonus round.

Frozen Inferno uses a bonus round that is directly tied into the main feature of both modes. The free spins are honestly less of a “bonus” and more of a natural conclusion to the buildup of the main spins. Once players get 4 wild symbols on the reels, the next fire or ice bonus symbol will trigger the bonus round.

Players are given a theoretically unlimited number of spins, but the game ends after 5 wins of any amount. Once the game ends, normal play will resume but the game mode will be reversed until the next bonus round. Fire becomes ice and vice versa.

The player’s extra wild symbols will be cleared off of the reels when the bonus round starts. The wilds should come back quickly during the free spins though. The draw of the bonus is that while the player starts off with whatever game mode they were originally in, the reels react to every win. Each winning spin causes the leftmost reel in the game to swap game modes. This doesn’t just change the look of the game, it allows players to start getting the other version of wild symbols in the bonus round.

Players are capped at 4 roaming wilds and 4 frozen wilds, although it can be pretty hard to actually get all 8 since once the wilds start filling up the reels the wins come quickly. While there isn’t a guaranteed amount, the wins are generally going to lean towards generous payouts as long as there are enough wild symbols on the reels to setup multiple winning paylines.

A Cool Find or a Hot Mess?

Frozen Inferno is a nearly perfect machine for a very specific group of players. This is a wonderful option for people who like to play a lot of spins without any complicated features or bonuses getting in the way.

The natural loop is perfect for someone looking to do a few hundred spins, and the bonus round even creates a consistent opportunity to call it a day.

The generous RTP of 96.36% should also be a nice treat for veteran slots players. The problem is that this is not a good machine for anyone who doesn’t have the time, interest or money to play an entire round.

Missing out on the growing wilds and the bonus basically defeats the purpose of playing, so anyone who’s not ready to make a commitment to the machine may want to look for something a little lighter.