Skip to content
Rate This Game
(4.5/5)
Submit
When submitting my score I agree that my IP will be stored to prevent abuse
Win Cash Prizes Playing Online Slots
1

Rich Uncle Pennybags is ready to start the main event, so come on down to the big stage. Barcrest provides a solid Monopoly online slot machine theme with a simple, sharp design.

Fans of the famous Milton Bradley board game will like the references to its classic pieces and cards, almost as much as they’ll like the big payouts and bonus wins that await. Although, the focus on the Big Bet game may mean that the slot game Monopoly Big Event is only a big draw for high rollers and big betters.

Overall, Barcrest did a nice job with the design for the Monopoly Big Event slots machine. While there aren’t any big animations to take players’ breath away, the general graphics are fine.

A pale skyline and layout of the board game make up the backdrop with everything in a dark red. While it’s not too exciting, it does at least provide a nice contrast for the green reels.

The symbols are also good. While it does make heavy use of the standard card symbols “A, K, Q, J and 10” they are done in a font that matches the feel of the game and they’re in bright, distinct colors.

The battleship, race car, dog and cat game pieces are all suitably shiny and the bonus symbols feature nice cartoon renditions of Uncle Pennybags and a vivid neon bonus symbol, even if the “wild” symbol is just a circle that says “wild” on it.

The finer points are done fairly well too. While it’d be nice if there were more animations that triggered on normal wins, there are some well-done cinematics for the Big Bet bonus wheel and the Big Event Bonus game. They help create the feeling of a real game show.

The music is also generally well done. There’s a soft jazz soundtrack that plays during the normal spins with a slight pick up in tempo for the Big Event. It’s nothing special, but it’s calm and relaxing for a long session.

Honestly, the gameplay is surprisingly simple given how complicated and large the bonus game and Big Bet systems are. There are 5 reels and 20 paylines. Players do not have the option to play fewer paylines.

There is a wild symbol that can appear and fill in for anything other than the bonus symbol. Any winning line must start on the left reel and run along a payline to the right.

It’s probably a good idea to review the paylines to avoid disappointment. Some combinations that would be winners on other machines don’t pay out on this one.

Other than that, the core gameplay is a standard slot machine with no other special features. There are no stacks, no swaps and no special wilds.

In general, this is a machine with fairly infrequent payouts that are fairly big. The worst payout on the reels is 10x the line bet for 3 10’s, J’s or Q’s. A set of 3 K’s or A’s pays out break even.

There’s also a peculiar layout to some of the paylines which means that certain sets of 3 payout twice. These larger wins help slow down the losses and stretch the bankroll out, but they’re mainly just there to keep things going.

There is a 2000x the line bet payout for 5 of the Uncle Pennybags symbol, but that’s the jackpot and obviously not a common win. Players should have the bankroll for a fairly long losing streak that gets turned around by the rich bonus game.

While playing the normal game, Big Event Bonus spaces can appear on the first, third and fifth reels. Getting one bonus symbol on each reel is enough to trigger the special bonus round.

Note that it has to be at least one on each reel. Just getting 3 in the basic game isn’t enough. Getting 4 or 5 bonus symbols offers an advantage in the first stage of the two-stage bonus game. There’s no immediate payout for hitting the bonus.

The first stage of the Big Event Bonus has players start by choosing a Community Chest card. These cards have amounts of either guaranteed wins or free spins on them, which get added to the counters at the top.

After picking a Community Chest card, players pick a Chance card. The Chance cards have either dice, green houses or red hotels on them. 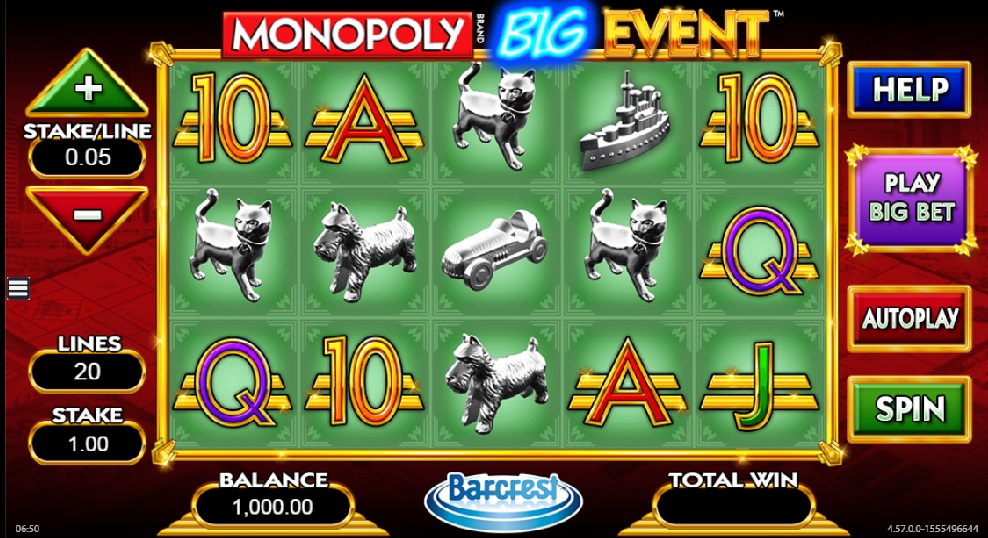 Players who got 4 bonus symbols to trigger the game will have the “house sneak preview” that highlights the three cards that have houses behind them.

Players who got 5 bonus symbols get to see which ones the hotels are hiding behind. As noted in the game’s help page, players with either sneak preview should choose two known cards and leave the third hidden so that they can get as many Community Chest cards as possible.

The game notes that the mathematically optimal strategy is to throw away the sure thing and keep picking other unknown cards to maximize the number of Community Cards, but that choice is ultimately up to the player.

After all of this, the bonus becomes a little more straightforward. The free spins won from the Community Chest cards play out with any modifiers active and with payouts set to the line bet that triggered the bonus. The one big twist in the bonus round triggers if players are lucky enough to get an “In Jail” symbol to appear. This space locks out the lowest value symbol still in play for the rest of the round, making it easier to win and easier to hit higher payouts. It is possible to trigger it more than once to really get rid of a few of the pesky card symbols.

If there are still guaranteed wins left after all of the free spins play, then the player moves on to an extra bonus round.

Each guaranteed win is converted to a spin on a bonus cash wheel which pays out a set multiple of the total bet that triggered the Big Event Bonus. Once these guaranteed wins pay out, the bonus round ends and the winnings are paid.

It’s important to note the role of the Big Bet. Like many other Barcrest games, Monopoly Big Event online slot game offers a Big Bet option.

Instead of playing normally, players can instead choose to pay for a set of 5 premium spins with special modifiers and a total bet set at 1 credit (0.05 per line).

One big change is that the Big Event Bonus can be triggered just by getting 3 symbols anywhere on the reels during the Big Bet. There doesn’t have to be one per reel. The 20 credit game uses progressive multipliers.

The 30 credit game is a little more complicated. It uses a bonus wheel to pick the modifier.

At the end of the 5 spins, they’re counted up and getting at least 3 anywhere on the reels triggers the Big Event Bonus.

One lingering problem with recommending a slot machine game like this is that it’s meant for a specific player. If you’re not someone with a big bankroll who can take a lot of variance and big losses without going broke, it’s not going to be a good fit.

The base game in Monopoly Big Event online slots feels almost irrelevant. It has a 96% RTP but frankly doesn’t have much interesting happening during it.

On the other hand, the Big Bet system has a 99% RTP, but obviously requires players to risk a lot and possibly end up down by a lot very quickly.

The basic reels are just there for players who don’t want to use the Bet Big system, but there are plenty of more interesting games with a similar RTP for anyone in that group.

If you can pay for the Big Bet, it is a fun, fast game with a great bonus round. Unfortunately, it’s going to be a disappointment to the average player looking for more than a few sets of 5 spins.