Rate This Game
(4.8/5)
Submit
When submitting my score I agree that my IP will be stored to prevent abuse
Win Cash Prizes Playing Online Slots
1

Dust off your dancing shoes and shine the disco ball because Super Jackpot Party offers endless fun and outstanding payouts.

The slot machine game, by WMS, has been a favorite for years thanks to its bold graphics, fun party-themed music and exciting bonus rounds.

You can relive your youth by exploring what it feels like to rebel against authority by avoiding the police, overbearing bosses and nerdy peers, aka “poopers,” who threaten to stop the party before it begins.

Have a “reely” good time testing chance by playing Super Jackpot Party. The bonus round rivals any small get-together you’ve been to in recent years.

You won’t be able to contain your enthusiasm when you outsmart the police or show off your incredible dance moves during the party animal feature.

The theme of the game is a fun evening with friends at a house party. Symbols in the game include gift boxes, balloons, party cups, cocktails, lucky sevens and glitter balls, are all things that make a celebration a real event. These combine with other symbols to pay out small amounts in wins. The money you make off this game isn’t found in the paytable itself but in the bonus round where various features are triggered.

You will meet two sets of characters in the bonus round. The first are the partygoers, whose wild outfits give them away. The second are the authority figures who put a stop to all the fun and ultimately end features because of their party-pooper mentalities.

Avoiding the “poopers” in the bonus round ensures better payouts and a more satisfying party experience overall. 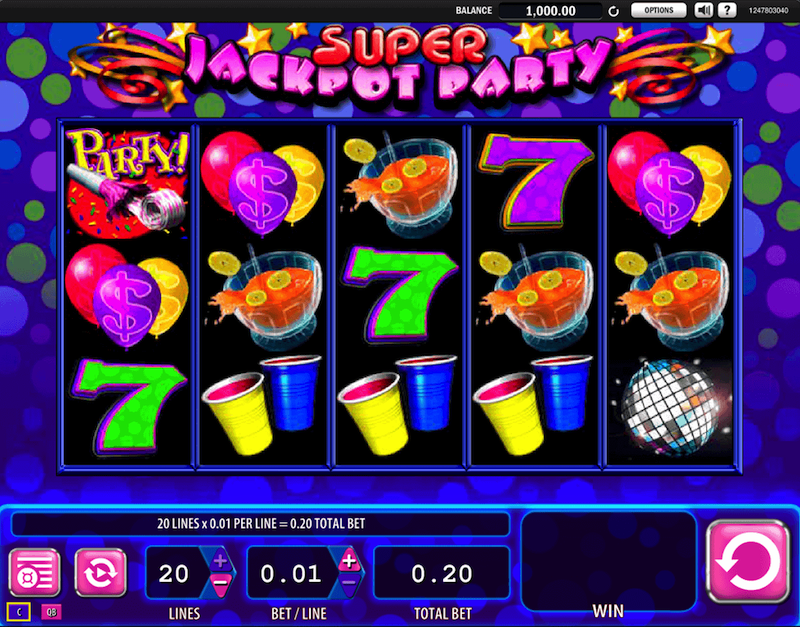 Super Jackpot Party has multiple features with various payouts. Disco ball symbols are wild and replace all symbols on reels two through five except for feature symbols.

Features include party, multiplier, party animal, surprise party and whack-a-pooper. To better understand how each works, read the following descriptions.

To activate the party feature, you must get two feature symbols in the first, third or fifth reels. You’re then prompted to select presents that contain various amounts of cash as well as special features.

If you select a present with a party pooper, the party feature is over unless you choose a party favor that ultimately saves the party and allows you to continue choosing presents again. Multipliers up to 10x

This feature takes the presents that you’ve opened and multiplies their cash amount by the number represented on the screen for up to 10x the original value. It lasts from one to three presents and deactivates the party pooper feature. Any cash wins during the party favor feature are added to what was won during the multiplier feature.

During this feature, you can also get the multiplier, dance or whack-a-pooper. When completed, you’ll be prompted to pick a party saver, which allows you to continue selecting presents again and add to the total dollar amount won during the bonus. If the wrong party favor is selected during the party saver feature, you return to the game and back to spinning reels in hopes of landing yet another round of feature symbols.

The surprise party bonus round

Even when Feature symbols aren’t present, the party feature can be activated by surprise. You’ll know instantly when this happens because you won’t see anything on the darkened screen until the lights go on and the grid of presents appear on the screen.

There is nothing more satisfying than taking a virtual mallet and whacking the party pooper of your choice. This bonus allows you to have three tries to hit one of the authority figures, aka party poopers, to receive prizes.

Depending on which character you whack, you could uncover 2x to 5x your bet or even wind up with an extra pick. The extra pick allows you to try choosing three poopers again or activating the dance feature, giving you even more opportunities to win big money.

The party animal busts a groove during the dance feature, which allows you to amass cash prizes until the bonus meter stops.

Once an amount is determined, it is multiplied and can yield anywhere from 8x to 57x the original payout. This feature is one that can help you rack up a significant amount of cash during the bonus round.

Although the paytable for this basic slot machine is low, Super Jackpot Party is an immersive experience with colorful graphics and foot-tapping music — especially during the bonus round.

Multiple features can be triggered during a single round, providing you with opportunities to earn a decent payout. If you’re looking for a game that you won’t lose a lot of money on, Super Jackpot Party has a low enough minimum bet to allow you to play for a long while.