Let’s take a trip back in time with the retro-inspired slot game: One Red Cent Deluxe. In this offering, Everi Gaming provides a slot that forsakes a lot of modern features in favor of fast, slick gameplay.

The small, 3×3 grid with classic symbols can be a breath of fresh air, although it also includes a quick bonus game included to add a little modern spice to the classic game.

One Red Cent Deluxe uses a utilitarian and almost stark art design. The main board is a dark-patterned background with red dotted lights displaying the running jackpot values.

The symbols are straight out of the oldest machines, featuring classic cherries, bells, bars and big red sevens. Shiny piggy banks and detailed pennies do add a little modern flair to the reels, but overall it feels like players are using an old, one-armed bandit. 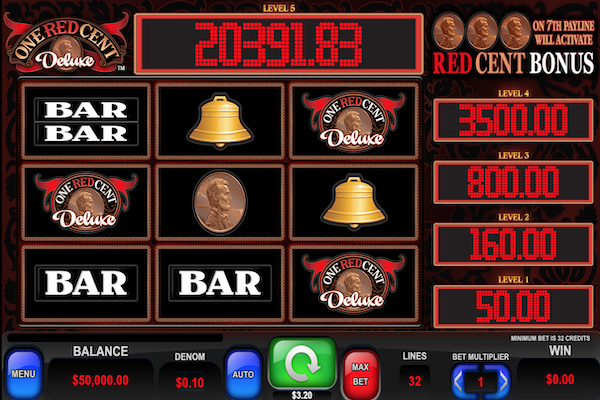 The sound design is similarly straightforward. With no background soundtrack, the only noises from the game are from the reels spinning and the thunk as they fall into place, one-by-one. Then of the bells that play to signal a win and payout. Only the bonus game triggers music, with a classical score setting the mood for uncovering some real riches.

The main gameplay is a simple grid that’s relatively friendly to new players.

There are three reels and three rows, for a simple nine-space board. There are 32 paylines and players do not have the option to reduce the number that is in play.

In general, three spaces touching will trigger a payout, except for the deluxe red cent spaces that allow Scatter wins with four or more. Each spin requires a 32 credit minimum bet, with no extra charge for the bonus round chance.

One important note is the range of available progressive jackpots. Players who bet the maximum amount of 160 credits become eligible to win. During the regular game, the specially marked deluxe red cent spaces can land on the reels. Getting five is enough to trigger a level one jackpot. Getting more deluxe spaces triggers higher level jackpots, all way up to a full board of nine rewarding the grand progressive jackpot at the top of the board.

Levels one through four are specific to each game, but the level five jackpot can potentially be linked to a larger shared pool. As noted, the jackpot is only available for players making the maximum bet, but lower-limit players aren’t totally out of luck. Getting five to nine deluxe spaces still triggers a payout ranging from 3x to 1,000x the total bet, even if the jackpot isn’t in play.

While the heart of the game is in the core slots and jackpots, there is still a bonus game to provide a little excitement. In the top left, middle and bottom right spaces, regular pennies will sometimes appear. Completing this diagonal line of pennies triggers the Red Cent bonus. This game provides a new board with nine available spaces. Each space can have a penny, nickel, dime or quarter behind it. Players begin the game by picking a space and revealing the hidden coin. Nickels reward 5x the total bet, with dimes and quarters paying out 10x and 25x respectively. Revealing a penny rewards 1x the total bet and ends the game.

Occasionally, as a special reward, one of the pennies hidden in the bonus round will be the titular Red Cent. Revealing this special space rewards the player with 100x their total bet. With a little luck, players can win up to 160x their total bet in the bonus round. Although, it’s fairly possible to pick a penny on the first try and end the game on an anti-climatic note.

The One Red Cent Deluxe slot game, by Everi, has fairly even gameplay that’s suitable for a longer session.

Getting four deluxe red cent spaces triggers a break even payout, and this seems to happen often enough to slow the drain on the bank noticeably. While the big wins are tied up in the jackpots and bonus round, there are some nice options for heftier payouts for the regular symbols. Getting a good line of bars isn’t uncommon and is a nice chance to get ahead without necessarily hitting it big. The bonus round also feels truly like a bonus. With the available range of jackpots and big wins, stretches without triggering the bonus don’t feel as dry.

Overall, this game is a nice choice for players who want a no-nonsense, pure experience. The graphics are simple, there’s not a lot of distracting noise and with only nine spaces the spins can be quick. An average RTP of 95.99 percent should also please more serious players. That said, anyone looking for a vibrant setting or big bonus round options may be disappointed.

This is primarily a slot for players who want a lot of quick spins with a chance for a jackpot or lucky sevens.