Rate This Game
(4.2/5)
Submit
When submitting my score I agree that my IP will be stored to prevent abuse
Win Real Cash Prizes Playing Online Slots
1

There are now five Willy Wonka slots from Scientific Games / Bally based on the Willy Wonka movie. These have characters and designs in common – with each game becoming more spectacular and immersive than the one before. The latest Willy Wonka slot games have screens that curve around you, as well as surround sound and hand motion detectors that allow you to interact with the display.

These are all based on the 1971 movie ‘Charlie and the Chocolate Factory’. While this movie looks dated by today’s standards, at the time the ‘Technicolor’ and special effects were state of the art. Add in an iconic performance from Gene Wilder as Willy Wonka, and you’ll find plenty of material on which to base these entertaining casino slots.

This page covers the slot machines Willy Wonka and the Chocolate Factory, World of Wonka, Pure Imagination, Dream Factory and of course, the Wonkavator slot. These are all found in live casinos in Michigan, Colorado and Atlantic City.

Online slots have loosely covered this theme over the years – none have come close to these impressive live slots.

What the Willy Wonka slots have in common

Before covering the individual games, this section looks at what brings the series together. The surreal sights and sounds of the chocolate factory provides a rich backdrop for all of the games.

Symbols are shared between the titles. In every case Gene Wilder in purple jacket and top hat is the highest paying symbol. He will appear stacked on some games, and in special larger sized symbols too. The characters from the movie are all higher paying symbols. They include Charlie, Grandpa Joe and Verruca Salt.

Oompa Loompas appear in all the games. They don’t feature as symbols, instead having a key role in the random bonuses. You’ll see the reels expand in different ways in the series of slots – and the catchy Oompa Loompa song play too.

All of the Willy Wonka slots have multiple bonus features. A big part of what keeps these games interesting is that you can win several different bonus games. This stops them becoming repetitive. There are picks games, free spins (sometimes with giant symbols) and jackpot games.

At the end of each bonus game, you’ll get to unwrap a chocolate bar, which can reward you with a ‘golden ticket’. This triggers a progressive jackpot. 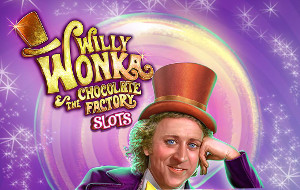 When you compare the original (in this series) Willy Wonka slot with others on the casino floor it stands up well. Compared to the newer games below, this is the simplest of setups. Instead of curved screens and tall screens that tower above you, this game simply has two standard sized slot monitors.

Scientific Games have used them to good effect. Oompa Loompa’s make their debut, stretching the reels onto the second screen and adding wilds in their base game bonus. There are tall Gene Wilder symbols and all the familiar characters appear on the reels.

Bonuses are triggered by hitting 3 or more of the golden elevator symbols. The elevator then shoots to the upper screen, stopping at one of many different bonus games.

Add to this the golden ticket shot at the end of each bonus (where you unwrap 6 bars) and the Oompa Loompa base game feature, and you’ll see that even the simplest of the Willy Wonka slots has a lot of features. The Pure Imagination slot is named after a song from the movie. Like the original it uses dual screen setup. These are big screens. One slopes away from you and the other is upright. The entertaining bonuses take full advantage of the setup.

Oompa Loompas again appear as a random feature in the base game. The reels can expand, with the green-haired creatures building them one row at a time. More Oompa Loompa’s then appear on top of the reels. They can pour sacks of sugar down the reels, turning them wild.

Bonuses are triggered by a golden egg respin feature. You keep collecting golden eggs until you spin with no more of them appearing. They then fill meters on the upper screen. The eggs then randomly fill meters on the upper screen. The bonus is chosen at random once the eggs are used – the more eggs in each row, the better your bonus. Here are the games:

After each bonus you’ll unwrap chocolate bars in this version of the ‘Golden Ticket’ bonus. Hitting that golden ticket wins you $5,000.

The World of Wonka slots machine has a brand-new screen setup. This sees three screens positioned to curve around the player. There is an additional screen above them, with a bonus wheel on top of that – making for an impressive looking cabinet. This game also includes motion sensor technology. When you hit a big win, you get to pop candies by waving your hands.

The curved screen makes for an entertaining random Oompa Loompa bonus. As their song starts, the creatures appear either side of the reels, stretching them out. Others then appear with ropes, adding rows. Wilds move in groups across the screen. Topping it all is a cart/train at the end that can give you win multipliers.

You trigger the bonus with everlasting gobstopper symbols. Two gets a respin, with 3 or more triggering a ‘Wonka Winko’ game above the reels. Here are the bonuses that can result from this:

As with the other slots in this range, you’ll unwrap a chocolate bar at the end of each bonus to see if you get a golden ticket. 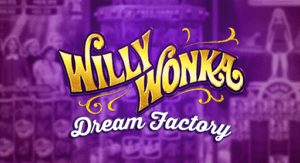 On top of a carousel of 3 Dream Factory slots you’ll see a 360-degree screen that spins to reveal the bonus features.

This game is a little different to the others. There is no Oompa Loompa base game feature. Instead Veruca Salt appears with an ‘I want it now’ random feature. Her song will start, and the highest paying Gene Wilder/Willy Wonka symbols appear, getting locked onto the screen in different configurations. You then see a wheel which can show ‘good egg’ (another spin) or ‘bad egg’ (game ends).

There is also a jackpot picks game with the everlasting gobstoppers. This is triggered separately from the other bonuses, with a gobstopper on reels 1 and 5. You see an entertaining sequence, then get to pick until you match 3 jackpots. You can also win jackpots with special jackpot symbols on the reels.

Regular bonuses need 3 glass elevators to trigger. The big horizontal wheel on top of the cabinet then spins. Here are the entertaining bonuses that you can win:

This is the only Willy Wonka slot without the golden ticket game after the features. This is replaced by 2 different ways of winning a progressive jackpot.

This game took the immersive curved screen idea and expanded on it – upwards. The top section of Wonkavator will tower above you. All the familiar elements are in place. This includes the candies and characters on the reels. There is an additional on-reel feature. When you hit a stack of Willy Wonka symbols, you get a respin with that stack turned into wild symbols. This can be worth hitting those times you trigger with multiple stacks.

Oompa Loompas appear again. They expand the reels upwards, making the best use of the tall screen. They then jump onto the reels, which can have wilds going up or down (or in some cases both).

Up to 10 wheel spins with Elevator bonus symbols

To trigger bonuses, you need golden elevator symbols. Bonuses are chosen randomly. You’ll see a mix of free spins, wheel bonuses and bubble picks floating around at the top of the screen. These pop and disappear one at a time, leaving the bonus you receive. Here are the Wonkavator features:

As with all the Willy Wonka slots, there is a golden ticket game where chocolate bars get unwrapped at the end of the feature.

This theme works brilliantly for casino slots. There are now online slots via Facebook apps to enjoy it too. All 5 of the games are entertaining in their own right. You might well come away with the special Oompa Loompa song used for their random bonuses stuck in your head.

The latest games use motion sensors plus a curved cabinet for an immersive experience. With plenty of bonus games on all versions, and progressive jackpots to be won, it is little wonder these slots are so popular in real money casinos all over the country.